Razzil Darkbrew, the Alchemist, is a melee strength hero whose claim to fame is being able to fill his inventory with expensive items at a much faster rate than most other carries. This is facilitated by his signature passive ability Greevil’s Greed, which grants him an increasing amount of bonus gold with every enemy unit that he kills.

Thanks to Greevil’s Greed, players that pick Alchemist will typically see themselves hit upwards of 800 gold per minute within the confines of a single game, and find themselves six-slotted by the 45 minute mark or so. The rate at which Alchemist is able to farm gives him a niche that no other carry can fill, allowing him to present himself as a fast but somewhat limited clock to his enemies.

The rest of his kit is surprisingly well-rounded for a carry’s arsenal. His first ability Acid Spray greatly reduces the armor of enemy units in a large area, while dealing physical damage over time to anyone that steps into the field. Acid Spray serves two main purposes in the laning phase: harassment in the form of ticking damage, and softening up enemy creeps in order to feed Greevil’s Greed. In mid to late game teamfights, the extra damage and armor reduction helps Alchemist tear through enemy heroes with his physical attacks. 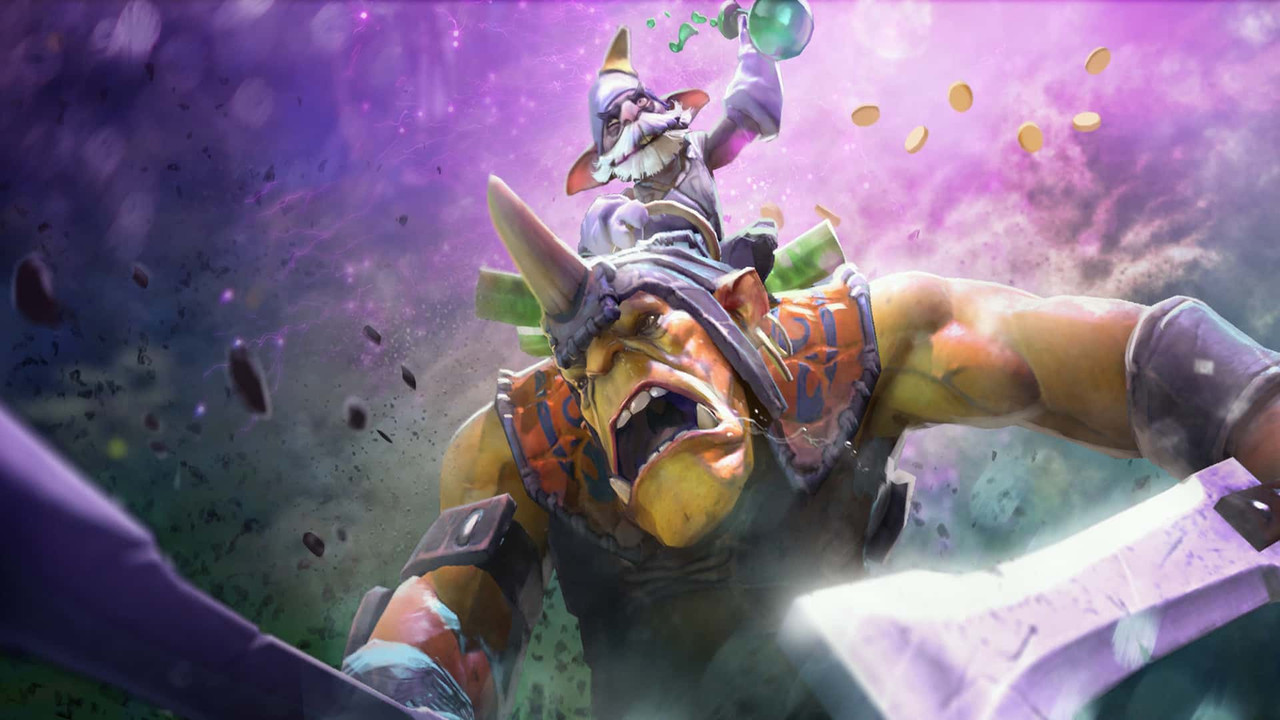 Unstable Concoction is a unique single target stun, as it requires “brewing” to reach its maximum potential. The longer Alchemist is able to shake the concoction, the more potent it becomes in terms of stun duration and damage. If, it is held for too long, however, the brew explodes in Alchemist’s face, stunning him instead of the intended target. Unstable Concoction thus requires a degree of finesse and prediction from the player, for it can easily backfire if used without care.

Finally, there is Chemical Rage, Alchemist’s ultimate ability and one of the best steroid skills in the game. Upon casting, Alchemist flies into a chemically-induced frenzy, vastly increasing his passive health regeneration and improving his attack speed by an incredible amount. Chemical Rage is what truly makes Alchemist a fearsome carry, allowing him to swipe away at enemy heroes at a ridiculous speed—while keeping himself alive thanks to the bonus regeneration.

Despite his unique strengths, though, Alchemist has many glaring weaknesses that keep him from simply rolling through teams unabated. Even with the power of Greevil’s Greed, Alchemist has a limited time to actually use his farm because he has no multiplicative scaling (i.e. passive critical strike, etc). If the game goes later than his usual timing window, harder carries will eventually catch up and outdo him at his own role. His low base armor and below average attribute growth per level also present serious problems, leaving him unable to leverage the bonus regen from Chemical Rage thanks to his mediocre health pool. Speaking of Chemical Rage, Alchemist is almost completely reliant on his ultimate, and he becomes a much smaller threat outside of it.

Fortunately, for those that just want to pick up Alchemist and learn how to play as him, his skill progression progression is actually very simple. Greevil’s Greed and Acid Spray will be your bread and butter abilities in the laning phase, whether you choose to play in the mid lane or the safe lane. Acid Spray helps box your lane opponents out, for they must respect its damage unless they have cheap armor items such as a Ring of Basilius. Should they choose to stand in its area of effect, they will be put in danger of a rotation from one of your team’s supports. Greevil’s Greed accelerates your farm, allowing you to reach your core items much faster.

Unstable Concoction should be left alone until Level 9, which is around the time when teamfights start to become more common. Because Alchemist has no escape mechanism, one point of Concoction at such a pivotal point in the game can mean the difference between surviving a gank or having your farming interrupted for several seconds.

Chemical Rage should be taken at every ultimate level, considering just how important it is to Alchemist’s damage and survivability in teamfights. Without it, he’s practically a sitting duck—so getting it to max level as soon as possible is vital.

The beauty of Alchemist having Greevil’s Greed lies in the fact that the accelerated farming rate it causes allows him to choose between a large number of items to play with. This grants him quite a lot of versatility to work with, which can be very useful depending on the situation.

That said, there are a few core items that you should always keep in mind, as they address Alchemist’s biggest weaknesses. Armlet of Mordiggian is one of them; it gives Razzil a good amount of bonus armor and more strength to work with in teamfights. Its active ability also synergizes well with Chemical Rage, which helps counteract the health draining effect. When Chemical Rage is at Level 3, it is even possible to keep the Armlet on at all times without having to worry about toggling it.

Radiance is another option that you can take in the early game. Combined with Acid Spray, you can use its passive component to deal an annoying amount of damage over time in a fairly large area, disabling enemy Blink Daggers in the process. Radiance also pairs well with Greevil’s Greed, especially against neutral creep stacks and large enemy creep waves. You’d be surprised just how much faster you’ll be able to farm with it on. But, as always, make sure to communicate to your team your intentions of purchasing a Radiance—for its costly buildup means that you won’t really be able to help your team until you complete it.

If you opt to go the Radiance route, you should definitely partner it up with a Manta Style. Not only does Manta increase your movement speed and attack speed (two things that are very valuable to a melee carry like Alchemist), but it also allows you to split push lanes thanks to the illusions also carrying the Radiance passive effect. The enemy team will be forced to deal with your copies eventually, or risk having their towers taken down without a fight.

Black King Bar is of course essential to Alchemist, due to his susceptibility to long stuns and disables. Its active ability also negates the effects of an Unstable Concoction cast gone wrong, preventing it from stunning and damaging you. In most cases, you won’t be able to skip BKB—unless the enemy team just doesn’t have enough disables to keep you locked down.

Towards the late game, you have a good amount of freedom when it comes to choosing situational pickups. Assault Cuirass shores up Alchemist’s lack of armor, while giving him a large amount of bonus attack speed to boot. Shiva’s Guard does pretty much the same thing—but instead of bonus attack speed, you get to slow opposing carries down thanks to its passive aura. The active ability is also quite useful when it comes to chasing elusive targets down.

Basher into Abyssal Blade is extremely effective on Alchemist, who can leverage his blazing fast attack speed in Chemical Rage to trigger bashes often. Abyssal Blade’s active stun also helps him and his team lock down magic immune targets. If a right click-dependent carry is getting you down, consider purchasing a Heaven’s Halberd in order to dodge their attacks and/or prevent them from attacking at all. Heart of Tarrasque massively increases your own survivability in long engagements, though it doesn’t really help anyone but you.

Aghanim’s Scepter is a special case for Alchemist, who himself does not really get any direct benefit from it. However, he is the only hero in the game that can give Scepter to his allies, which causes them to receive whatever bonuses it would have had they otherwise purchased it themselves. And that’s not all—getting Scepter from Alchemist actually applies the bonuses as a permanent buff, rather than taking up an inventory slot. That alone can be huge for certain heroes that need every slot they can get, particularly those that thrive in late game scenarios. This special mechanic allows Alchemist to aid his team even after he hits six slots in his inventory, so be sure to use it when necessary. Your team might want to draft heroes with high-impact Aghanim’s Scepter upgrades, too.

Thankfully, Alchemist’s teamfight combo is relatively simple and easy to remember. Before running over to the enemies, you will want to activate Chemical Rage first in order to get the bonus movement speed right away. While doing so, wind up Unstable Concoction, then make your way towards the enemy team.

Ideally, your team should have a dedicated initiator, who will start the fight first in order to buy time for you to brew your stun. Your job is to follow up on their initiation, preferably with a max duration Concoction. Of course, it’s much better to just release your stun early if cooking it isn’t viable; a second or two is better than stunning yourself, after all.

Once that’s done, lay down Acid Spray, then swipe away at whatever target you need to remove first. Make sure to use your items like Armlet or BKB, in order to give yourself the largest teamfight advantage possible.

Speaking of Chemical Rage, Alchemist’s heavy reliance on the ability can also be exploited. Ancient Apparition’s Ice Blast prevents him from regenerating any health during Chemical Rage, while the item Spirit Vessel greatly reduces the regen rate. Playing around its cooldown is also a good idea, thus exploiting the window where Alchemist is at his weakest.

By the same token, large amounts of burst damage is usually enough to bring Alchemist down, especially before he is able to farm health-increasing items or BKB. Ursa’s Fury Swipes will cut straight to the bone, with Chemical Rage being powerless to save Alchemist from the sheer damage output. Similarly, combined magic damage abilities can remove Alchemist from the fight before he even has a chance to respond, though of course this won’t really fly if he has BKB unless you and your teammates catch him completely off guard.