Nessaj, the Chaos Knight, is a melee strength hero commonly played in the hard carry position. A planeswalking horseman mounted upon a mighty steed named Armageddon, Chaos Knight is an unpredictable malevolent force capable of grinding his enemies to dust in the blink of an eye.

His first ability Chaos Bolt seems like a straightforward single target stun at first glance, but upon closer inspection it is where Chaos Knight’s randomness begins. Upon impacting the target, Chaos Bolt will lock them in place for anywhere between one to four seconds. Its minimum and maximum damage on hit also vary wildly, making it impossible to predict just how effective it will end up being. That said, however, it is still Chaos Knight’s bread and butter ability, allowing him to disable key targets in order to keep them from escaping his unholy wrath.

His second active ability Reality Rift is a lot like Phantom Assassin’s Phantom Strike and Riki’s Blink Strike—but with a wild twist mixed into it. Upon cast, Reality Rift teleports you and your target to a random point on the line between the both of you, slowing their movement and attack speed for two seconds in the process. This ability also includes any illusions you might have within a 1375 unit radius, which means that they also get transported next to the target. Reality Rift is what allows Chaos Knight and his army of illusions (which we’ll get to in a bit) to close the distance to an enemy hero almost instantaneously, and is an important part of his kit as a melee hero. 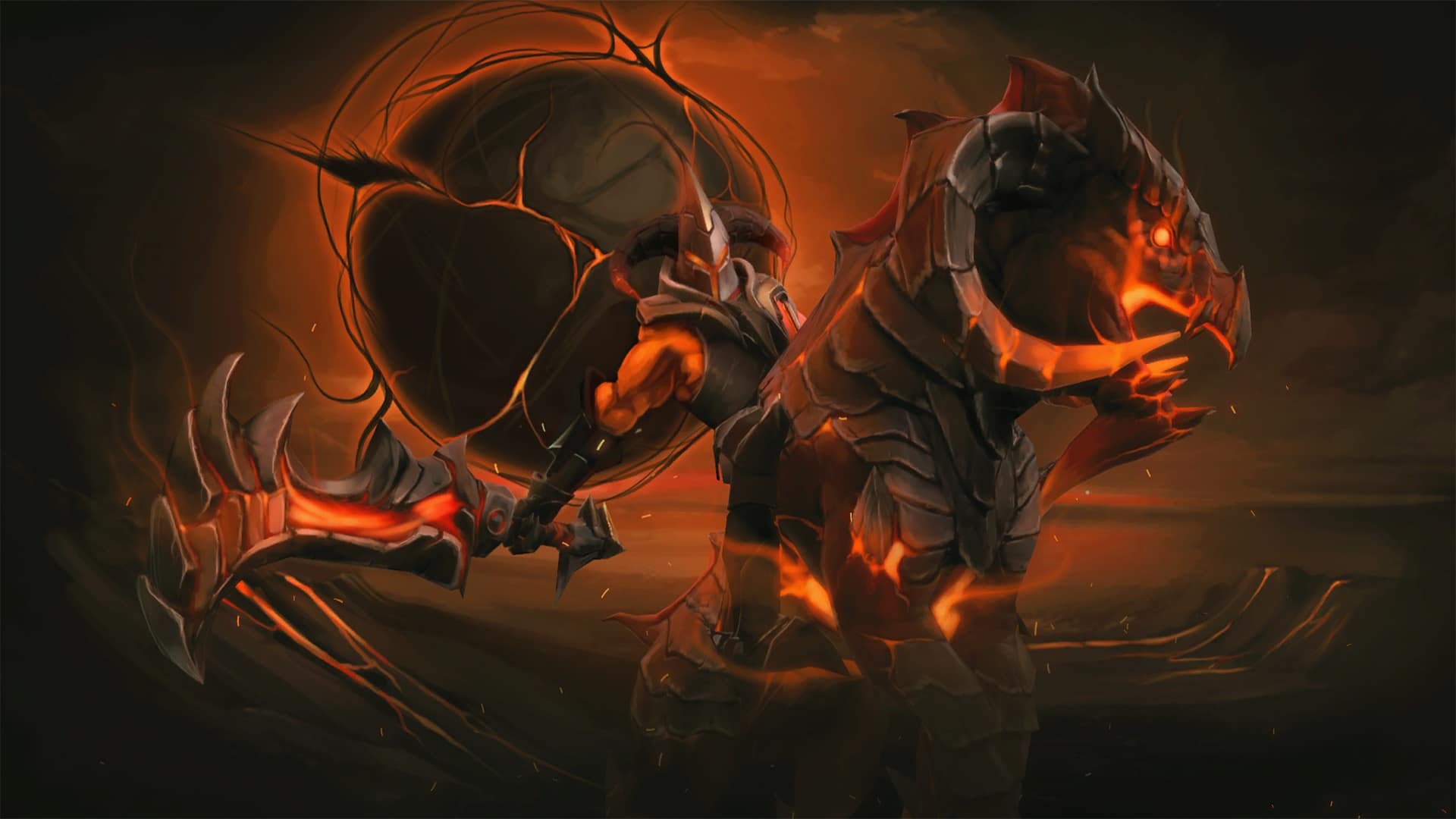 Chaos Strike, his only passive ability, causes his regular attack to hit for anywhere between 120 to 250 percent of his attack damage every so often. In addition, this attack has a lifesteal component, which heals Chaos Knight for up to 65 percent of the damage that he deals through Chaos Strike. Chaos Strike is the very reason that Nessaj is notorious for deleting enemy heroes in an instant, and is the source of his damage outside of items.

And finally, there is his ultimate Phantasm, which conjures three illusions that last 30 seconds each. Unlike other illusions though, Phantasm images have the potential to deal 100 percent of Chaos Knight’s attack damage, which makes them just as powerful as the real hero himself. They also have the ability to trigger their own instances of Chaos Strike, which can melt a single enemy hero in no time. Phantasm can also be used to siege high ground later in the game, as the damage output of each illusion helps Chaos Knight raze towers at an incredible rate.

Aside from the unpredictable nature of his kit, though, Chaos Knight’s weaknesses include a tiny mana pool, a long cooldown on his ultimate, and his lack of a farm accelerant. His mana issues can extend well into the late game, and can render him unable to use Phantasm and his other active abilities. Teams that are alert can play around Phantasm’s 145-second cooldown by pushing and/or engaging Chaos Knight’s team while his ultimate isn’t available, which forces them to fight at a drastically reduced power level. And finally, heroes that can harass him effectively can box him out of the lane, denying him of precious creep kills and gold.

Because of the radical changes made to his kit in patch 7.20 (November 2018), Chaos Knight’s skill progression has shifted significantly from his old builds. Reality Rift and Chaos Strike are now much more desirable in the early to mid game, while Chaos Bolt is left at Level 1 due to its drastically reduced projectile speed and slightly reduced damage values. That said, Chaos Bolt is still the best skill to take first, due to its utility in contesting Bounty Runes and as an escape mechanism.

From there, it’s a matter of deciding whether to max Reality Rift or Chaos Strike first. If you are up against a lane with plenty of harassment potential, consider going for Chaos Strike first. The lifesteal keeps you topped up on health every now and then, and helps immensely in the last hitting game. It also deals a surprising amount of damage to heroes, though naturally this isn’t reliable due to its luck-dependent mechanics. On the other hand, if you’ve got an easy lane, investing into Reality Rift can help you set up ganks easily and chase down stragglers thanks to its long cast range and short cooldown at Level 4.

Once both of these are done, simply move on to Chaos Bolt and call it a day. Phantasm should be taken at every ultimate level, in order to maximize the damage output of the illusions as soon as possible. Mind that you don’t run out of mana during a teamfight, though; each level of Phantasm increases its mana cost significantly.

As a melee strength carry that relies on illusions, Chaos Knight’s items typically consist of health or strength-boosting equipment, items with bonus attack speed, and protective trinkets such as Black King Bar.

In the realm of HP items, Armlet of Mordiggian comes to mind first and foremost. Armlet is incredibly cost-effective on Chaos Knight, giving him a huge boost in strength (and therefore damage and health) in the mid game. The increase to his maximum HP also propagates to his illusions, making them much more durable. This is the first major item you should be aiming for in most cases. As for your choice of boots, we recommend Phase Boots—thanks to its bonuses to movement speed and attack speed as well as the valuable unitwalking mechanic. Chaos Knight is beholden to his illusions’ positioning when Reality Rift is on cooldown or otherwise unusable, which is where the phasing comes into play.

Before getting into the true late game items, though, a Black King Bar is necessary for Chaos Knight, even knowing that he is an illusion-based hero. The spell immunity helps him shrug off powerful nukes and disables alike, allowing him to bash enemy heroes with impunity. On the other hand, the presence of Phantasm actually gives Chaos Knight the luxury of choice when it comes to getting BKB. If the enemy team isn’t capable of picking out the real Chaos Knight quickly, it may be more beneficial to skip BKB altogether and use the illusions to confuse your opponents instead. Read the situation well before making the decision, and you might be rewarded with an extra inventory slot and more gold to spend on something more useful.

Manta Style will be the last of the core items going into the late game. More illusions for Chaos Knight is always good, mostly because of how each one can trigger Chaos Strike regardless of how they were spawned in the first place. Be careful not to rush Manta Style, though. Not having the health necessary to support additional illusions will just cause them to die early in a teamfight, especially against drafts with area-of-effect nukes.

From there, the shop opens up for situational and luxury pickups. Heart of Tarrasque turns you into an unstoppable juggernaut, and can easily increase your health to almost 5000 points. Eye of Skadi solves your mana issues while also giving you a valuable passive slow. While Octarine Core seems like an item Chaos Knight would rather avoid on paper, its cooldown reduction gives you a way to sustain yourself in engagements without having to purchase a Satanic. The number of Chaos Strikes you can put out in one teamfight with Octarine Core is actually kind of ridiculous, and we implore you to try it out if you get the chance. And finally, Assault Cuirass can be used to further improve Chaos Knight’s physical DPS, while also increasing the armor of his illusions.

Chaos Knight’s combo in a teamfight is relatively simple, though it can overwhelm newcomers with the number of buttons to press and actions to perform. For the most part, though it can be boiled down to activating Armlet of Mordiggian then Phantasm and Manta Style (if you have it) in order to prepare your illusions, using Reality Rift to close the gap to a key target, then stunning them with Chaos Bolt right after. From there, the Chaos Strike procs will take care of the rest, typically blowing up squishy heroes in one fell swoop.

Rinse and repeat for the rest of the enemy team’s heroes, activating Black King Bar if necessary.

Because of his dependence on illusions, Chaos Knight hates going up against heroes that can kill them off quickly. Axe with his Berserker’s Call and Counter Helix can clear illusions out before Chaos Knight even has time to react, especially when combined with Blade Mail. Tinker can either blind or wipe out his illusions with an Aghanim’s Scepter-upgraded Laser blast, followed by Heat Seeking Missile. Cleave carries like Sven and Ember Spirit can mow down his illusions with Great Cleave and Sleight of Fist respectively. Timbersaw’s kit of area-of-effect spells can easily remove illusions from the game, as well. Consider drafting such heroes against him in order to contain one of his most vital assets.

Mana removal mechanics can also be a serious thorn in Chaos Knight’s side, especially in the early game. Lion’s Mana Drain, Nyx Assassin’s Mana Burn, Anti-Mage’s Mana Break, Invoker’s EMP, and Diffusal Blade all cause massive headaches for him. Remember, if he has no mana, he will be unable to do much of anything other than stand and fight or run. This is still true in the late game, as his DPS simply isn’t spectacular when he is bereft of his illusions.