Lucifer, the Doom, is a melee strength hero notorious for his ultimate ability, named after himself. Doom is a single target spell that serves as one of the best disables in the entire game, silencing and muting (read: disables the use of items) enemy units for an eternity while dealing ticking damage at the same time. This ability alone essentially creates a 4v5 situation in Doom’s favor during teamfights, especially if it is used on a hero that relies on its own spells and items to contribute.

Used properly, Doom’s ultimate can swing an engagement firmly towards his side, crippling the enemy team and preventing them from mounting a proper response. This makes Doom himself a massive threat to certain heroes and drafts—a threat that must be dealt with before he is able to remove a key hero from the teamfight.

The rest of his kit gives him some well-needed versatility, preventing him from simply being a one-trick pony completely reliant on his ultimate. His first ability, called Devour, causes Doom to eat a neutral or enemy creep, digesting it over 80 seconds. As a bonus, Doom gains the abilities of the creep, assuming it was a neutral creep with spells and passive abilities of their own. This allows Doom to serve several different “micro roles”, if you will, thanks to the many different abilities he can steal from creeps in the jungle. Once the creep has been fully digested, Doom gains a bonus gold bounty depending on the Devour’s ability level. Doom can consume more than one creep at a time, assuming that the last one eaten is still being digested when Devour comes off cooldown again. 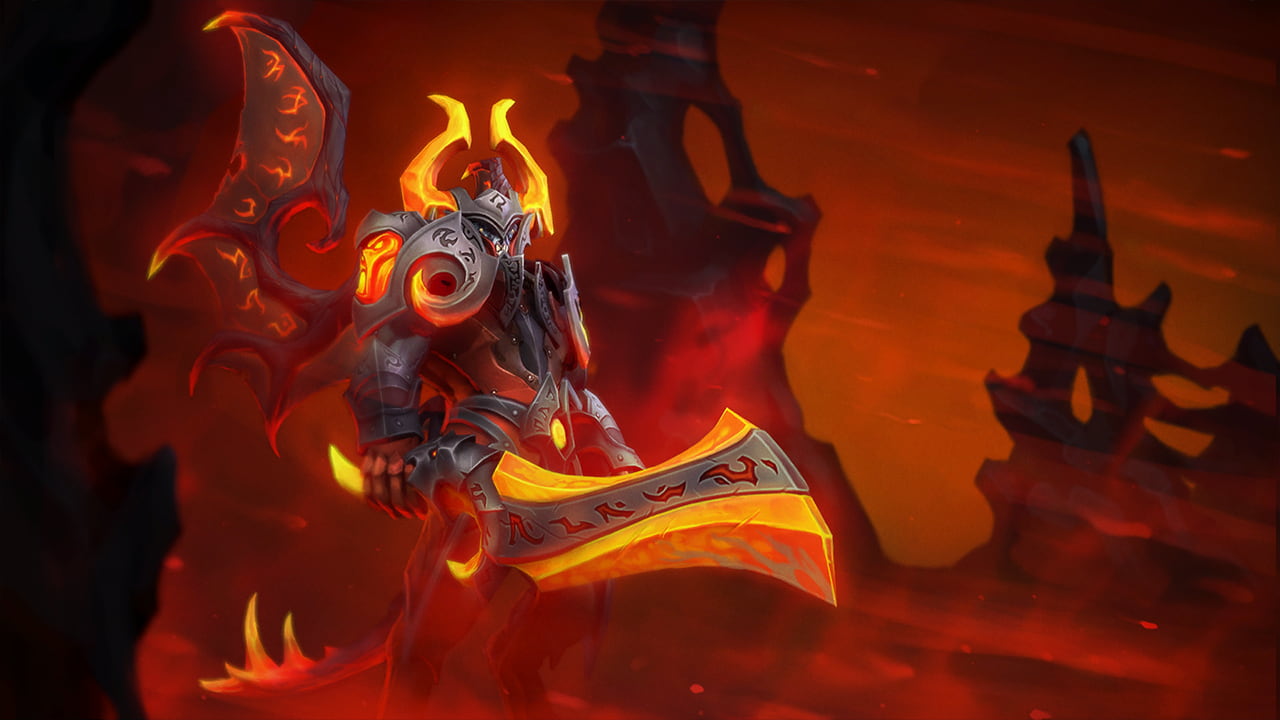 His second ability, Scorched Earth, produces a carpet of flame in a large area around Doom. This conflagration follows Doom as he moves, increasing his movement speed significantly while dealing damage over time to anyone that dares step into his territory. Any units that Doom controls also receive the movement speed bonus. Scorched Earth is what allows Doom to chase his prey at a surprisingly fast clip, and stay within striking distance at all times.

Scorched Earth synergizes directly with his third ability, Infernal Blade, an attack modifier. With a single swing of his fiery weapon, Doom stuns his target for a short duration, while also applying a burning effect that deals up to five percent of the target’s maximum health per second over six seconds. Infernal Blade is where the bulk of Doom’s mid to late game damage comes from, thanks to the fact that it scales as his enemies’ health pools grow larger. It also serves as a channeling spell interrupter, thanks to the ministun attached to the impact effect.

All in all, Doom’s kit makes him perfect as an offlaner or even a solo mid hero in some scenarios, as well as an irritant in teamfights. Despite his extremely threatening presence, however, even Lucifer himself has weaknesses. For one, he is slow to move outside of Scorched Earth, which means that fast-moving ranged heroes in particular can give him trouble. His low starting armor also presents problems in the laning phase, making him susceptible to physical damage-based harassment. This is compounded by the fact that his base agility and agility gain per level is one of the lowest in the game, which means that his armor issues never really go away until he is able to purchase armor-increasing items.

His true Achilles’ heel, however, comes in the form of his greatest asset: his ultimate ability. Doom has an extremely long cooldown, and is only really effective against heroes that depend on their spells and items. Right click carries care very little about it, in fact, unless they also need access to mobility skills. It is also blocked entirely by Linken’s Sphere, which can catch Doom players off guard if they do not exercise due diligence by checking their target’s inventory first.

Fortunately, despite his slight complexity when compared to other melee strength heroes, Doom’s skill progression is quite simple and makes sense to even the untrained eye. This generic skill build focuses on getting Devour to max level as soon as possible, in order to accelerate one’s farming pace and allow for somewhat frequent attempts at last hitting safely in the offlane. The latter point is especially important, considering Doom’s slow movement speed and how much he has to risk just to go for last hits the normal way in the offlane.

Infernal Blade is given second priority, as it does still pack quite a punch even in the early to mid game. It is also your primary ganking tool outside of your ultimate, and can also be used to either score last hits or harass melee/short range lane opponents. Be sure to utilize its ministun component when needed, to cancel Town Portal Scrolls and other channeling spells.

A value point in Scorched Earth is all you will need in the early game, because your other two abilities are just a lot more important. The scaling on it isn’t particularly great, either—so we recommend saving it for last. Also, our recommended Level 10 talent of choice gives the ability a free additional 16 percent movement speed right off the bat. Doom, on the other hand, should be taken at every opportunity; it is the very reason for your existence, after all.

Doom’s typical core items will revolve mostly around increasing his pitiful base armor, as well as increasing his movement speed so that he is able to more effectively chase down targets. Without armor-increasing items, Doom’s high strength gain becomes essentially worthless in the late game, due to how much damage he takes from physical attacks. Patching this weakness up is the first priority, as it prevents Doom from being a truly tanky nuisance in teamfights.

To start things off, we recommend purchasing a pair of Phase Boots in the laning phase. It is the perfect early game item for Doom, since it grants five points of additional armor, a nominal amount of increased attack speed, and the ability to run faster while phasing through units at the same time. With Phase Boots and something like a Wind Lace in tow, you can even attempt to kill one of your lane opponents when you hit Level 6.

Speaking of Wind Lace, it can be later upgraded into a Drum of Endurance, which gives you more health and mana to work with as well as a nice burst of movement speed from the active ability. It’s a very cost-effective item that will tide you over until the mid game, so we definitely suggest considering it at least.

Going into the mid game, you have the choice of getting a Shadow Blade. This item allows you to set up ganks with your ultimate fairly easily, while also giving you a soft escape mechanism. The increased attack speed is nice as well, though we don’t recommend purchasing it if the enemy team has built-in forms of detection (i.e. Zeus Lightning Bolt, Slardar Corrosive Haze, Bounty Hunter Track, etc).

For the late game, we highly recommend getting yourself a Shiva’s Guard. Not only does it give you a crapton of armor to protect yourself with, but with the movement speed bonus from Scorched Earth, you can really abuse the active ability quite often. You can chase down entire teams with both abilities, while also slowing them down in the process. The utility you get from Shiva’s Guard cannot be understated, and your team will definitely love you for it.

The rest will be composed of situational pickups, which will vary depending on the enemy team’s draft for the most part. Blade Mail works great on Doom due to his large health pool and imposing presence in teamfights, plus it also gives you a small amount of bonus armor. Black King Bar is always there if you find yourself getting locked down too often. Vladimir’s Offering is another solid choice if you really want to take on the role of “aura carrying tank”, and is especially effective if you have a carry with a small health pool but high attack speed.

On the flipside, you can pester the enemy’s own carry by purchasing a Heaven’s Halberd, which works wonders when combined with your ultimate. Unable to fight back at all, carries will have to disengage from you if they are both Doomed and disarmed, which creates space for your team to pick off the backline.

Special mention should be given to Aghanim’s Scepter, which causes Doom to also apply the Break mechanic when cast. This actually used to be included with the ability at no extra cost, but was removed back in Patch 6.82 (September 2014). The upgraded Doom can be devastating to passive-reliant heroes such as carries or heroes like Abaddon and Bristleback. Not only that, but buying Scepter also causes Doom to last indefinitely as long as Doom himself is within a 900 unit radius of any affected targets—which is quite easy thanks to Scorched Earth and the usual movement speed items. If a passive-heavy hero is getting you and your team down, consider going for a Scepter.

Doom’s teamfight rotation will depend somewhat on what abilities he has stolen from neutral creeps, though even then it will still revolve around just getting Doom off on a key target. If you have a mobility item such as a Shadow Blade or a Blink Dagger, you may want to use it in order to initiate with your ultimate. Sneak up or blink right on top of a support (making sure they don’t have an active Linken’s Sphere beforehand), then cast Doom on them immediately.

Activate Scorched Earth and use Infernal Blade on your target right after, using the bonus movement speed to keep up with them. This is your team’s cue to follow up on your initiation, either by picking off the rest of the enemy team or by focusing down the Doomed target.

Doom does not like going up against heroes that can kite him and abuse his lack of armor—which means that ranged right click carries in particular do well against him. This, of course, becomes less of a problem as he is able to acquire more armor-boosting items, though generally speaking most carries should already be sufficiently farmed by that point to negate this. Still, it is something that can really keep him down in the early to mid game, so it is always a good idea to hunt Doom down before he is able to farm his core items.

Playing around his ultimate’s cooldown is also something that your team should try to do. Doom has a whopping 145 second cooldown, so it can only be used every so often. When it is on cooldown, Doom is far weaker than he would be otherwise; be sure to exploit this to the fullest.

And finally, there is Linken’s Sphere: the ultimate counter to Doom’s most prized asset. It completely nullifies the effects of his ultimate ability, causing it to never get applied so long as Linken’s Sphere is off cooldown. Doom also does not have a natural way of cancelling Linken’s Sphere without items, which makes it very difficult for him to initiate onto heroes that carry the item. Supports in particular will want to invest in this, if they are being targeted by Doom often.