Aiushtha, the Enchantress, is a ranged intelligence hero who punishes those that dare raise their blades against her and run from nature’s justice. Her signature ability Impetus deals Pure type damage depending on how far the target is at the time of impact. This makes her a serious threat from long range, able to dish out resistance-ignoring damage at a fairly consistent rate.

Her most powerful passive ability Untouchable slows the attack speed of whoever is attacking her by a significant amount (as much as 170 attack speed at max level), making her excellent at going toe-to-toe with right-click physical DPS carries. Combined with her offensive active ability Enchant—which slows on the movement side—she can kite melee carries with no mobility skills for a long time while raining down upon them with Impetus. In addition, Enchant allows her to take control of enemy or neutral creeps, giving her the ability to push lanes and provide additional utility to her team. 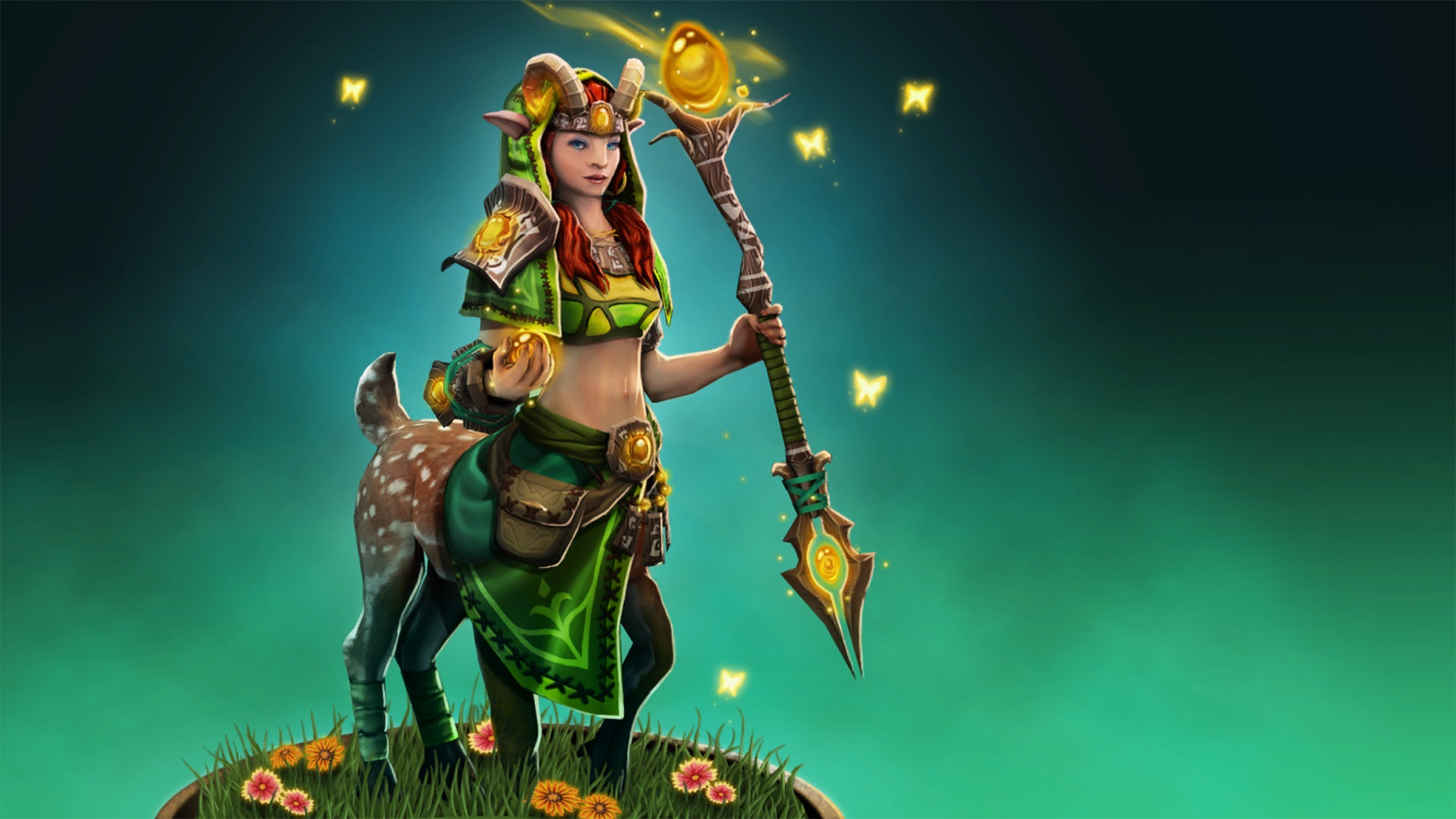 To round out her kit, Enchantress has Nature’s Attendants, which heals her and any allied units in a small radius at a surprisingly fast rate. This keeps her healthy during teamfights, as well as gank attempts against her. Her design allows her to start out as a support hero, keeping her teammates healthy while irritating enemy heroes with her complementary skills. Then, she can transition into a core role, carrying items such as Hurricane Pike and Aghanim’s Scepter in order to crank out some serious DPS.

However, she does have some glaring weaknesses that keep her from being an instant win condition. For one, she is extremely vulnerable to burst damage, particularly from spellcasters that can nuke her down in the blink of an eye. Such heroes don’t care a single bit about Untouchable, after all, and can exploit her pitiful health pool accordingly. She is also easily countered by spell immunity mechanics, with Black King Bar rendering her useless for up to 10 seconds at a time.

But even with her shortcomings, her superb flexibility means that she can placed in just about any position, and will likely fit in several different strategies and hero compositions.

The following skill build assumes that Enchantress will be taking the offlane role, and will have the appropriate farm priority as a result. As of Patch 7.19c (September 2018), solo offlane Enchantress is the generally accepted route in the metagame, thanks to her ability to play without a lane partner in a dual lane focused meta.

Your first order of business is to put one skill point in Nature’s Attendants at the start of the game, in order to give yourself some healing in case aggressive enemy heroes decide to gank you before the creeps even spawn. The second skill point should go straight into Untouchable, which you will be maxing out first to help yourself against harassment in the offlane. Of course, this won’t make a difference if your lane opponents happen to have spammable magic damage abilities, so against heroes like Skywrath Mage just make sure to play it safe and use Magic Stick if necessary.

Nature’s Attendants will then be the second priority, so that you can heal your teammates during mid game teamfights while you slowly build up your core items. Don’t be shy to use it early in a fight; it lasts a whopping 11 seconds and only costs 140 mana at max level. Enchant will be the final priority, unless there is a pressing need for a long-duration single target slow.

Of course, Impetus should be taken at every opportunity, to maximize its damage output as soon as possible. Enchantress is half the hero she would be otherwise without it, after all.

As an offlaner, your item choices will primarily revolve around improving your Impetus damage—by way of increasing your effective attack range and improving the ability itself directly. Dragon Lance is the first mid game item you should aim for, as it gives you some valuable stats to pad your awful health pool with as well as additional attack range for a very reasonable cost.

This will later on be upgraded to a Hurricane Pike, which is one of the best items in the entire game for Enchantress. Not only does it give you even more stats, but it also gives you a way to almost instantly reposition yourself in a teamfight or gank attempt. If your team composition includes vision abilities such as Tusk’s Frozen Sigil, Bounty Hunter’s Track, or Bloodseeker’s Thirst, you can abuse Hurricane Pike’s unlimited range mechanic to deal absurd amounts of damage with Impetus.

Later on, you can double down on Impetus’ power with Aghanim’s Scepter, which increases the cast and attack acquisition range of the ability. This means that you can hit Impetus’ upper damage limit much easier, without having to put yourself in much danger. Remember, though, that the damage is still capped at 24 percent (32 percent with the Level 25 talent), regardless of whether or not you have Aghanim’s Scepter.

Situational pickups (support/utility/protective items) include Eul’s Scepter of Divinity (gives you even more movement speed on top of Enchantress’ already insane base value, plus a handy disable), Linken’s Sphere, Black King Bar (you become an unstoppable turret of pure damage with this), or Pipe of Insight. For more damage and freedom of movement, consider purchasing a Scythe of Vyse or a Bloodthorn.

The best way to deal with Enchantress is to pick heroes with high burst damage abilities. Doing so circumvents the protection that she gets from Untouchable, and goes straight for her biggest weakness: her tiny health pool. Lina, Crystal Maiden, Luna, Timbersaw, and Lion are excellent picks against her in this regard.

Some carries also have abilities that aren’t affected that much by Untouchable. Ursa’s Overpower, Troll Warlord’s Fervor and Battle Trance, and Windranger’s Focus Fire all cancel out the attack speed slow, allowing them to deal consistent physical damage to Enchantress. For those that aren’t blessed with such abilities, Black King Bar nullifies Untouchable completely.

Your team should also consider buying Blade Mail against Enchantress. With it, you can turn Impetus’ DPS against her, making her at least think twice of continuing her assault.