An unorthodox ranged carry, Gyrocopter requires a bit more game sense and itemization know-how to use properly. Fly the friendly skies through our hero guide.

Aurel, the Gyrocopter, is a ranged carry that takes on a form that can be considered strange or unorthodox compared to traditional ranged carries. This is in large part due to his signature ability Flak Cannon, which allows him to attack all targets within a large radius simultaneously. Each projectile that comes out of his makeshift aircraft takes his regular attack damage, and applies it to all enemy units within that radius.

Combined with his first ability Rocket Barrage, Flak Cannon essentially makes Gyrocopter a “splash” carry—which means that his goal is to deal damage in an area rather than focusing all his physical DPS on one target. This places him in a similar league to carries such as Sven, Tiny, and Ember Spirit, who excel at dishing out damage to multiple enemies and generally fall flat in one-on-one engagements. That said, though, one should not underestimate Gyrocopter one-on-one, as Rocket Barrage can easily tear apart the unsuspecting if there are no other targets for it to lock onto. 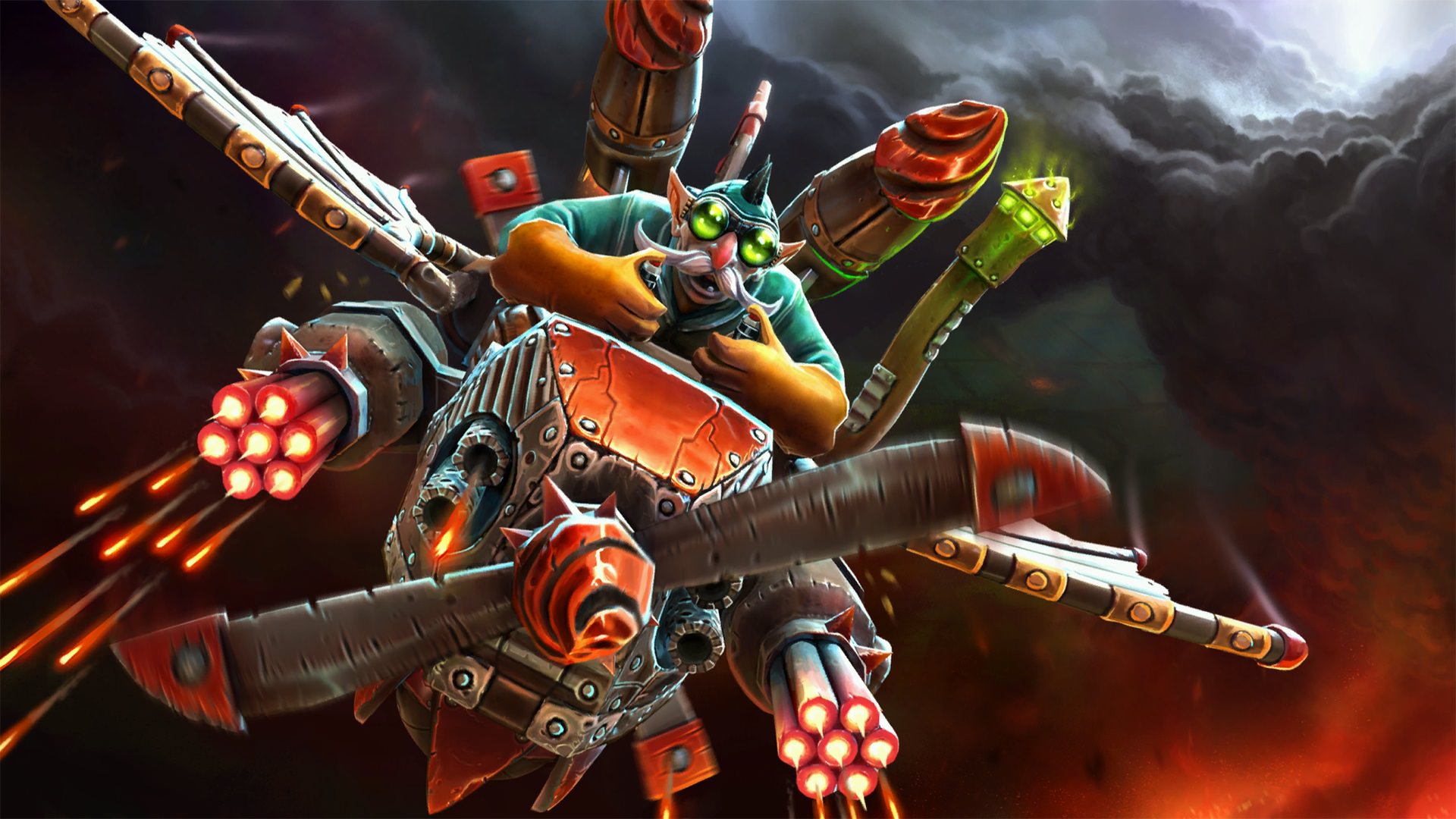 His kit is complemented by Homing Missile, which gives him a valuable stun and magic damage nuke that can be cast at a decently long range. While it seems rather underwhelming at first due to its slow movement, Homing Missile can be used to box enemy heroes out from the lane, or help set up ganks alongside other heroes with faster stuns and disables. And finally, his ultimate ability Call Down drops two missiles in a large area, dealing heavy magic damage and slowing down all enemy units caught in their wake. Thanks to its short cooldown and low mana cost, Call Down can even be used to farm creep waves.

All of these elements combine to make a fearsome core hero that has the ability to engage from a multitude of distances. His skills also allow him to farm at a great pace, faster than carries with no cheap built-in farming tools. And as opposed to most other heroes in his class, Gyrocopter has good early game damage, which discourages people from getting aggressive on him without a significant numbers advantage.

But of course, he does come with weaknesses too. His lack of an escape mechanism is the most obvious one, making him a sitting duck when caught off guard by multiple enemy heroes. This isn’t helped by his fragility, having just 19 base strength and a per-level strength gain of 2.1. Also, he doesn’t really have the ability to deal amazing amounts of damage when Flak Cannon is on cooldown, an issue exacerbated by his short attack range.

As a one-track hero meant to be a carry through and through, Gyrocopter’s ability progression only really follows one predefined path. Generally, Rocket Barrage should be your first unlocked ability, as it allows you to fend off would-be gankers at Level 1 as well as assert dominance over the Bounty Rune spawns. Lone heroes would be wise to think twice before jumping you with Rocket Barrage off cooldown, so it’s essentially your “soft” escape mechanism in the early game.

Flak Cannon should be leveled up alongside Rocket Barrage, with a value point in Homing Missile in between. Along with Rocket Barrage, Flak Cannon allows you to farm creep stacks and creep waves at an efficient clip, which helps you get to your core items quickly. They can also both be used in conjunction with your supports, in case you and your teammates feel like getting aggressive in lane. Above all else, though, you should focus on farming.

Homing Missile should be maxed out last, as its scaling doesn’t really justify investing into it over your other two abilities. Call Down, meanwhile, should be taken at every opportunity.

Due to his unique design as a carry, Gyrocopter’s item build focuses more on mitigating his short attack range and giving himself more ways of repositioning in a teamfight. Movement speed items will therefore be key for him, particularly pickups such as Manta Style, Sange and Yasha, and Butterfly. In the early game, cheap items like Ring of Aquila, Phase Boots, and Mask of Death (later upgraded to Mask of Madness) help him survive the lane and farm the jungle more effectively.

Once the mid game rolls around, Gyro needs a Black King Bar. As one of the most fragile carries in the game, he is prone to getting stunned, disabled, and slowed during engagements—all of which severely hamper his ability to deal damage and stay close enough to the enemy team to put out Flak Cannon shots. BKB is absolutely essential to Gyrocopter, even when he has teammates that can help him survive such as Omniknight and Dazzle. Just buy it, folks. You need it.

From there, you can proceed to upgrade your Yasha to whatever suits the situation best. Sange and Yasha is the usual route, but Manta Style is very much desirable versus silence effects and other disables that can be purged off. Consider the latter against Orchid Malevolence carriers such as Storm Spirit, Nature’s Prophet, and Queen of Pain.

During the late game transition, you’ll want to work on your Butterfly. This item alone allows you to toe-to-toe with single-target hard carries, and its active component can also be used in case more movement speed is required in a pinch. The bonus agility also makes you hit faster and harder, and causes your Flak Cannon shots to hurt more.

The rest of your inventory will be filled with situational pickups. Monkey King Bar should be purchased against evasive heroes, while Daedalus greatly increases your burst damage. You may also want to consider getting a Hurricane Pike, should you really need the escape mechanism. It’s particularly useful versus Riki, one of your hardest counters.

Gyrocopter’s rotation in a teamfight typically starts off with Call Down, provided that he is at least Level 6. Call Down allows him and his teammates to get in position, while dealing preliminary damage to any enemy heroes that might be in the area. Otherwise, leading off with Homing Missile is the best choice, as it forces the target to either stand and try to destroy the missile in flight or run to a safe place before taking the hit.

From there, you will want to activate Phase Boots in order to get a boost in movement speed, while also priming Flak Cannon. Be sure to turn on Rocket Barrage once you get up close, then start attacking the nearest target. Pop Mask of Madness if you have it after all your abilities are used up, and Black King Bar in order to protect yourself from stuns and disables. Rinse and repeat for any other targets.

Because of his short attack range, Gyrocopter is very prone to kiting and disables that keep him in place. BKB-piercing roots in particular such as Shadow Shaman’s Shackles do well against him, provided that he doesn’t have Linken’s Sphere to block it with. Also, because his damage is predicated mostly on his abilities, silencing him before he can prime Flak Cannon and Rocket Barrage works wonders. Consider drafting Orchid carriers, or heroes with hard silences such as Night Stalker and Silencer.

Heroes with great mobility can avoid Gyrocopter’s damage altogether. Timbersaw’s Timber Chain helps him escape Gyro’s clutches, as does his natural durability thanks to Reactive Armor. Queen of Pain and Anti-Mage can simply blink away from him and his Homing Missile, ensuring their safety no matter where Gyro is.

And lastly, there’s heroes with great burst damage potential like Lina, Lion, and Zeus can make short work of Gyro before he even gets to put up a fight. Remember that his health pool isn’t exactly the best, and that he has no way of mitigating or blocking incoming nukes on his own without items. Abuse this in the early game to slow down his farm and item progression.