Huskar, the Sacred Warrior, is a ranged strength hero that is defined by the word “sacrifice”. His overall power is determined mostly by how much he gets hurt in battle, with his strength increasing dramatically the more blood is shed from his own body.

His first ability Inner Fire is a simple area of effect nuke that radiates outward from Huskar upon activation. In addition to doing damage, however, Inner Fire also knocks back anyone caught in its wake, while also disarming them for a few seconds. Essentially, Inner Fire is Huskar’s “get off me” skill, which he can use to dissuade gankers from pursuing him.

His second ability, called Burning Spear, applies a damage over time effect to his regular attack by removing some of his health upon casting. Unlike other such attack modifiers, though, Burning Spear stacks infinitely, making it extremely dangerous in a protracted duel with an enemy hero. Moreover, Burning Spear allows Huskar to exert incredible pressure in lane, thanks to the stacking damage. Its lack of a mana cost also means that he can spam Burning Spear at will at any stage of the game. 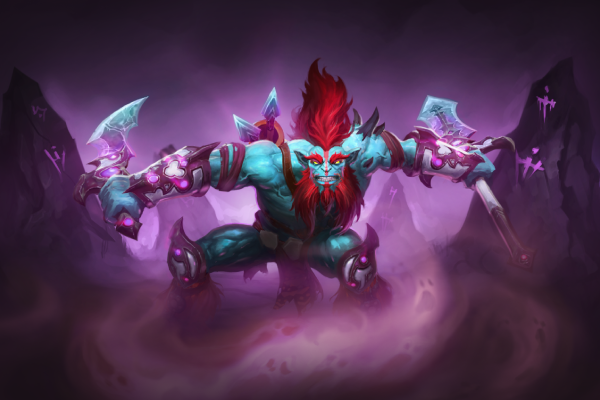 Berserker’s Blood, his only passive ability, is where the core of Huskar’s “sacrificial” design comes from. Whenever Huskar is injured in battle, he gains more attack speed and passive health regeneration based on how much health he is missing. The bonus attack speed caps out at 340, which is just 60 points shy of Ursa’s Overpower at Level 4. Meanwhile, the health regeneration is based on his strength, with a maximum of 80 percent bonus regen at Level 4. Berserker’s Blood makes Huskar one of the most terrifying duelists in the game, thanks to the exponential growth of the bonuses associated with the ability. Heroes should always think twice about standing their ground versus Huskar, or they may simply get run over by a runaway freight train.

And finally, there is Life Break, his ultimate ability and his only built-in gap closer. Upon casting Life Break, Huskar pounces at the target, immediately shedding nearly half of his current health while dealing the same amount to the enemy in magic damage. In addition, the target is slowed by up to 60 percent on impact. Aside from dealing heavy damage to his prey, Life Break allows Huskar to access the bonuses from Berserker’s Blood instantly, without having to take hits beforehand. In addition, Life Break pierces spell immunity, allowing Huskar to close the distance to any target as long as they aren’t carrying a Linken’s Sphere.

Huskar’s kit makes him a fearsome ganker, while also giving him the capacity to serve as the team’s hard carry. However, his dependence on having less than maximum health means that playing Huskar requires care and finesse, lest the player overextend himself. He is also not suited to taking on multiple heroes at once, due to the fact that two out of his four abilities are focused entirely on bringing down one target at a time. Countering him with specific hero picks is also quite easy, thanks to his weakness versus high magic burst damage and reliance on passive health regeneration to survive.

Thanks to the simple gameplan that Huskar aims for in each game, his skill progression is just as easy to remember and apply. Burning Spear will get first priority in the laning phase, as it is a very potent harassment tool that can box opposing heroes out of the lane for absurd lengths of time. Should his lane opponents choose to go for creep kills regardless of Burning Spear, Huskar can take advantage of their aggressiveness by applying even more damage and perhaps even going for the kill. It can also be used to contest the initial bounty rune spawns.

We recommend investing into Berserker’s Blood alongside Burning Spear, as these two abilities go hand in hand for obvious reasons. Getting Berserker’s Blood to a high level in the early game pays off almost immediately, thanks to the large attack speed bonus that each level gives. The additional health regen also helps you stay in lane longer, which is always a good thing.

A single value point in Inner Fire (specifically when Huskar hits Level 4) can be quite useful as well, as it forces enemies to disengage should they attempt to tower dive you. This is quite important due to Huskar’s lack of an escape mechanism, with Inner Fire serving as a “soft” escape of sorts.

Life Break should be taken at every level, in order to get its damage and life loss to their maximum potential as soon as possible. As soon as Life Break is available, you will want to get active on the map, securing kills for you and for your team. This is because Huskar does not farm quickly at all, which means that his main source of income will be from kills and assists.

Huskar’s usual inventory is composed of items that increase his available health, armor, and ability to wreak havoc in teamfights unabated. So basically, things that most carries would love to have, aside from direct increases to their attack damage.

In the early game, Bracers will make up the bulk of your stats. The additional strength helps you dish out more damage via Burning Spear, while also reaping the benefits of Berserker’s Blood without having to get dangerously close to dying. The additional magic resistance also makes you more durable versus enemy mages, which are pretty much the bane of your existence. Once you have your Bracers squared away, you will want to buy yourself a pair of Phase Boots, which increases your movement speed and attack speed while also giving you more armor to work with.

Going into the mid game, your first big purchase should be an Armlet of Mordiggian. Its active ability allows you to manipulate your own health, which can mean the difference between barely surviving an engagement and getting brought down by your usual counters. The additional strength when it is active also means that you dish out more physical damage, while also getting more out of Berserker’s Blood when your current HP is low. Next up is Heaven’s Halberd, which gives you the ability to go toe-to-toe with more traditional physical DPS carries thanks to its built-in evasion and its disarm ability. The additional strength and damage is also quite nice.

Your final core item should be Black King Bar, due to the fact that you run the risk of getting disabled and picked off every time you cast Life Break into a teamfight. The magic immunity will allow you to rain hell upon your target, without having to worry about your attacks getting cut short by a stun or hex effect. Don’t skip this one, kids—Huskar really needs it.

After BKB is done, you have the luxury of choice going into the late game. Need to hit evasive targets? Get a Monkey King Bar. In need of a reliable escape mechanism? Force Staff into Hurricane Pike will give you just that and more. Looking to leverage your health against enemies who dare to fight back? Blade Mail will suit you just fine. Unable to square off against another carry with an MKB of his own? Satanic may be just what you’re looking for to sustain yourself in 1v1 fights.

Huskar’s rotation in teamfights is just as simple as his skill build, really. Initiate with Life Break, turn on Armlet of Mordiggian, then start hitting your target with Burning Spear. If their teammates come to help them, use Inner Fire to cause them to disengage. Toggle Armlet as needed to keep your health at a reasonable amount. Rinse and repeat for whoever might still be alive.

In spite of his “scrub killing” design and kit, Huskar actually has many different counters in the game. The most obvious ones are those that take advantage of his health-based mechanics, such as Ancient Apparition with Ice Blast and Axe with Culling Blade. Ice Blast prevents Huskar from regenerating health in any manner, which is devastating to him for reasons that are clear-cut. Axe, on the other hand, goes straight for Huskar’s throat, preventing him from abusing Armlet toggling to keep himself alive.

Bloodseeker and Lifestealer also deal with Huskar quite well in their own ways. Bloodseeker gains huge bonuses from Huskar being injured thanks to Thirst. He also takes massive damage if he dares to use Life Break while under the effects of Rupture. Lifestealer, on the other hand, shrugs off all the damage from Burning Spear with Rage, while preventing Huskar from escaping with Open Wounds. Feast allows him to duel Huskar effectively, keeping his own health up while destroying Huskar thanks to the bonus damage based on the target’s current health.

Huskar also does not like going up against illusion-based heroes, because his only area-of-effect ability deals a measly 265 damage at max level. That isn’t nearly enough to keep mirror images off his back, even with the disarm mechanic thrown into the mix. Consider drafting heroes like Phantom Lancer, Terrorblade, and Naga Siren against him.