N’aix, the Lifestealer, is a melee strength hero that feasts on heroes with large health pools, while sustaining his own vitality in the process.

His signature ability Feast, which he might as well be named after, causes Lifestealer to regain a portion of his health while attacking an enemy unit. This is expressed as a percentage of that unit’s maximum health, which makes N’aix more dangerous versus heroes that rely on stacking HP rather than armor to survive. In addition to the lifesteal mechanic, Feast deals the same amount as bonus physical damage—further strengthening him against durable enemies. 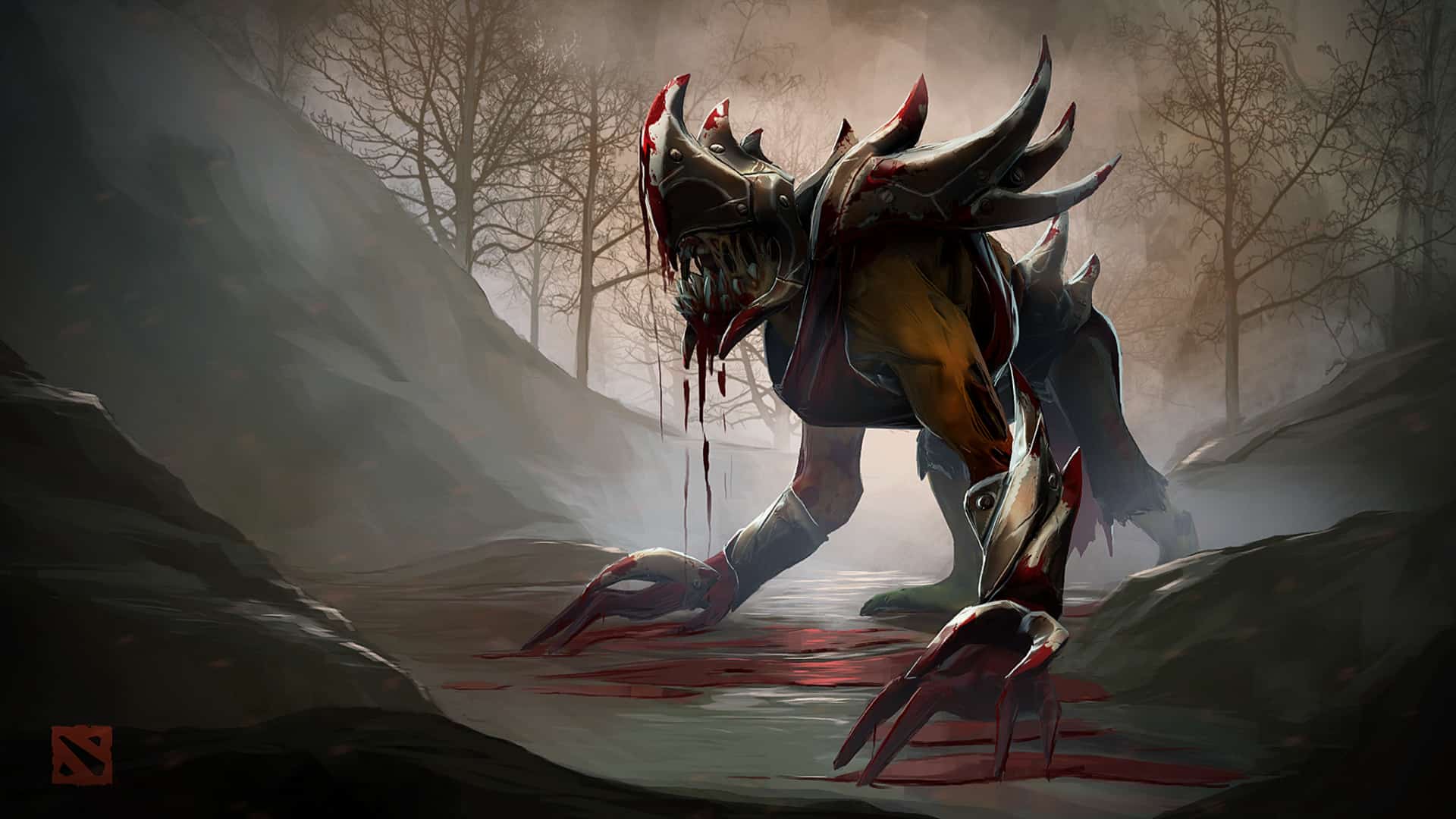 The rest of his kit is meant to allow him the freedom of movement and give him the ability to chase down his preferred targets, which is important to a melee hero such as Lifestealer. Rage is a built-in magic immunity skill, with an attack speed bonus thrown in as well. Open Wounds cripples a target unit, greatly slowing their movement speed (which tapers off over time) and increasing how much health N’aix gains when attacking them.

His ultimate ability Infest causes Lifestealer to bury himself inside any unit, protecting himself from damage and other harmful effects. At any time or until the unit itself is killed, N’aix can come bursting out of his host, dealing magic damage in a small area of effect around him. When paired with mobile heroes such as Storm Spirit or Puck, Lifestealer can perform what is called “Infestbombing”, which happens to be a fantastic way of getting straight into a teamfight without having to walk all the way there.

Thanks to his built-in magic immunity, versatile ultimate, and ability to recover health in the middle of heated engagements, Lifestealer can become a force to be reckoned with as a hard carry. Strength heroes in particular hate going up against him, for N’aix can turn their large health pools against them in a hurry. Unfortunately, his middling movement speed, short attack range, and lack of disables to keep targets in place with mean that he is extremely kiteable—making it difficult for him to be a hundred percent effective against certain drafts. He also does not have spectacular late game scaling, and will generally struggle against harder carries with an equal amount of farm.

Due to the multiplicative scaling of Feast, it is almost always better for Lifestealer to pass on maxing it out until his other two non-ultimate abilities are fully leveled. Thus, just one value point will do for the early game. For the rest of the laning phase, you should be trading points between Open Wounds and Rage, with the latter taking priority. You should, however, stop putting points in Open Wounds after it hits Level 2, in order to get Feast up and running for the mid game.

Make sure to get Infest at every ultimate level. That’s it, really. N’aix’s skill build is fairly simple, as only two of his non-ultimate abilities are actually of any use during the laning phase. Not much else to say about it.

Lifestealer’s usual arsenal of items consists of one or two core items, with the rest being situational pickups depending on your team’s lineup and that of the opponents’. This is because there are instances where Rage alone will be enough to shrug off stuns, slows, and disables—while there are times when your opponents will have ways to slow you down even through your natural magic immunity. Picking the right items for the occasion is one of the keys to success when playing N’aix.

Before we get into those items, though, the core items come first—as they will help you get through the mid game smoothly. Phase Boots will generally be your boots upgrade of choice, thanks to the movement speed boost and anti-kiting properties that it possesses. It also gives you a small amount of bonus attack speed, which Lifestealer always appreciates due to the nature of his signature passive ability.

Armlet of Mordiggian should be your next pickup, which shines in Lifestealer’s hands thanks to their supreme synergy. The extra health, armor, and damage you get from the active ability cannot be overestimated, and you can always just recover the health lost per second through the lifesteal from both Feast and Open Wounds. Both Rage and Infest also give you plenty of time and opportunity to toggle Armlet on and off, in order to boost your health repeatedly in a pinch.

Both Armlet and Phase boots are pretty much the only items that you should purchase in every game, and ideally you should have them both before the late game rolls around. Once it does, the situational pickups take over. The most common ones are Desolator and Assault Cuirass, which both deal with the reduction and/or increase of armor. Desolator works in tandem with Feast, allowing N’aix to go after low-health supports without having to rely completely on Feast’s bonus damage to bring them down. Desolator also happens to affect buildings, which helps Lifestealer and his team take objectives. Assault Cuirass helps shore up N’aix’s rather low base armor, while also increasing his attack speed and thus his overall DPS. The armor reduction aura also hinders foes and their buildings.

Sange and Yasha is another excellent choice for Lifestealer, as it provides a good amount of extra health, damage, movement speed, and attack speed all in one inventory slot. Combined with Phase Boots, Sange and Yasha will allow you to run around quite quickly, while shrugging off negative effects outside of Rage thanks to the status resistance. If your draft revolves around exploiting a mid game timing, then Sange and Yasha should be your go-to item.

Against particularly slippery heroes, Basher into Abyssal Blade would be ideal. The lockdown both items provide should not be underestimated, and can easily allow you to tear certain heroes apart before they can escape. Both items also give you bonus strength and health, which are always good. Against carries, on the other hand, consider purchasing a Heaven’s Halberd, which gives both evasion and a handy disarm to work with. And speaking of evasion, both Bloodthorn and Monkey King Bar are viable options when it comes to dealing with agile heroes, with the former being better against carries that don’t have ways of removing the active effect from themselves.

Alternatively, you could opt for the Radiance route, which involves avoiding teamfights in the mid game in order to focus on farming. Radiance happens to go well with Lifestealer thanks to Infest’s sub-ability Control—which allows the player to take direct control of an Infested creep from within. The Radiance aura persists even in this state, which means that N’aix can use creeps as a vehicle for Radiance burn in teamfights without putting himself in too much danger. This route does, however, require preparation and a lot of time, so it should only be considered in very specific situations.

Ideally, your initiation in a teamfight or gank attempt should come in the form of Infestbombing, though for obvious reasons this won’t always be available. Even then, your core combo is practically the same; Infestbombing only adds an extra step.

With that out of the way, you generally want to open a fight with Open Wounds, which should go on either a key support or a tanky hero. The slow effect will allow your team to catch up to the target, in the hopes of isolating them from their own teammates before they are able to assist. If damage is needed right away, pop Rage to gain the attack speed bonus. Otherwise, keep it off cooldown if you need to dodge certain spells that would otherwise stop you from attacking. Use whatever items you have in order to increase your movement speed or prevent enemy heroes from kiting you while you wail on their teammates. Rinse and repeat as enemy heroes go down.

As mentioned earlier in this guide, kiting Lifestealer is one of the most effective counters to the hero. He is heavily reliant on getting up close and personal with his targets, so staying well out of his range is always advisable. Because of his lack of hard disables or stuns, Force Staff is one of N’aix’s worst enemies, as it can push heroes affected by Open Wounds well out of his reach. Likewise, slows that go through his magic immunity work well against him.

Preventing Lifestealer from regaining his health is another way of dealing with him. Ancient Apparition’s Ice Blast disables health gain and regeneration entirely, and its debuff sticks around even through Rage. Spirit Vessel does pretty much the same thing, though its effect can be removed by any dispel.

Lifestealer also does not appreciate going up against illusion heroes, who tend to ignore his magic immunity by dishing out physical damage instead. N’aix doesn’t have a way to deal with mass illusions, either—at least without the assistance of Maelstrom/Mjollnir, Battle Fury, or Magnus’ Empower. There is very little that he can do in a straight up fight against Phantom Lancer or Terrorblade, for example.