Meepo, the Geomancer, is a melee agility hero that happens to be one of the most uniquely designed characters in Dota 2 — and perhaps even the MOBA genre as a whole. Unlike most other heroes, which are the sole entities controlled by each player in the game, Meepo players take control of multiple clones thanks to his ultimate ability Divided We Stand.

Each Meepo clone shares attributes and abilities with the true Meepo, though they are only able to equip the boots that the true Meepo wears. However, each clone can gain gold and experience independently, which both go to the same pool that the true Meepo owns. This means that Meepo can farm and level up faster than most other heroes can, since he can send his clones to neutral creep camps or other lanes in order to kill creeps there. In fact, it isn’t uncommon to see Meepo players hit Level 15 or so long before other heroes in the game do—which is a significant advantage. 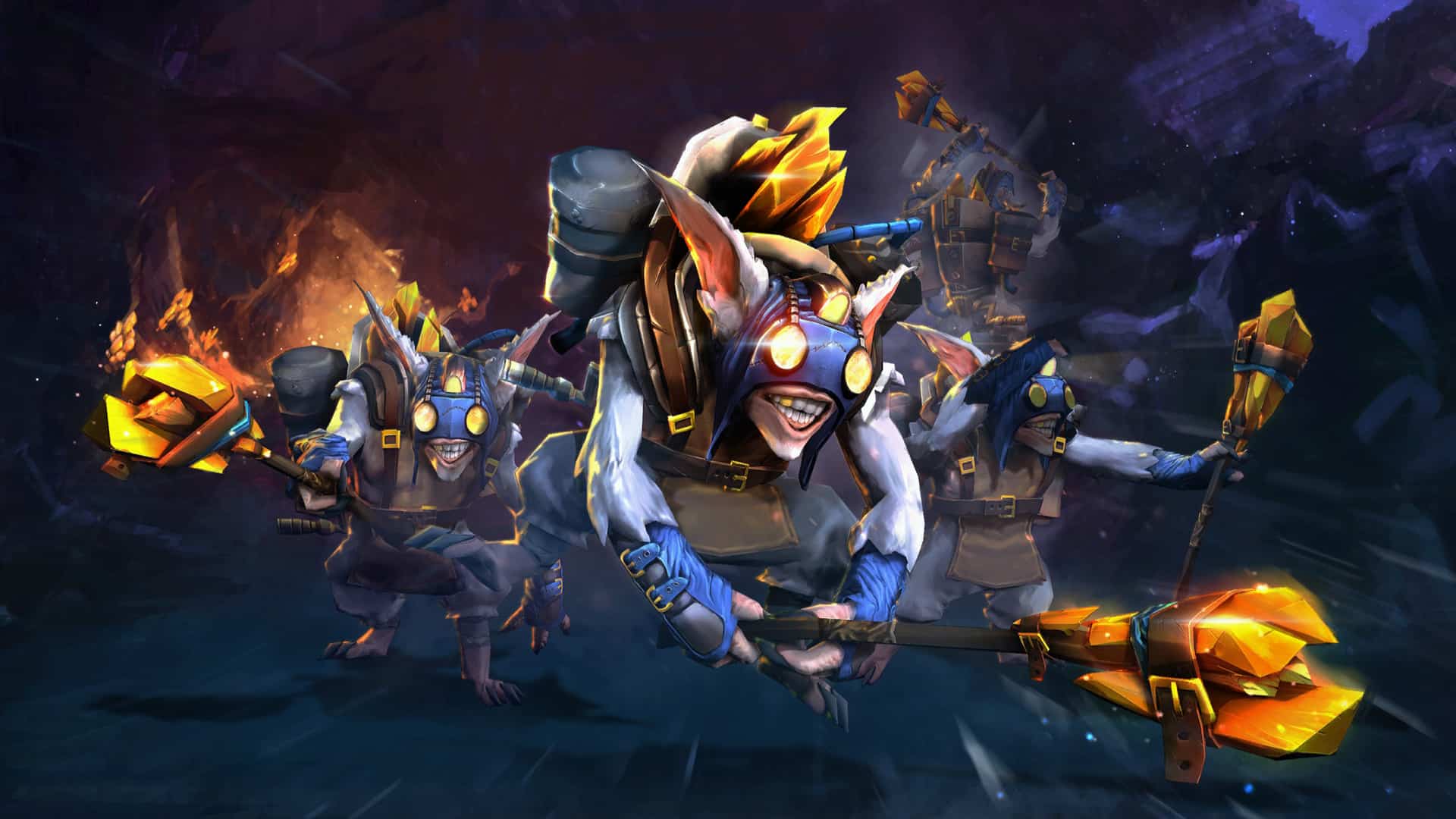 But of course, Divided We Stand comes with a few caveats other than the intense level of micromanagement required to use Meepo correctly. Should any Meepo die, whether clone or original, all of them die instantly at the same time. This means that players must be careful not to get one of their clones singled out, for they are very weak individually.

The rest of Meepo’s kit is designed around the concept of stacking abilities, as they are somewhat mediocre on paper but become very deadly when chained together. His first ability Earthbind causes Meepo to toss a net that roots all enemy units within a small radius upon impact for two seconds. A few casts of Earthbind from each Meepo can easily pin down one or two heroes for a long time, which is more than enough for him or his team to finish them off before they can escape.

His other two abilities, called Poof and Ransack, pair well with Earthbind’s rooting mechanics. Poof causes Meepo or one of his clones to teleport to another target Meepo on the map, no matter where that Meepo is. Upon teleporting, each Meepo deals a small amount of magic damage, both at the site of departure and arrival. Poof can very easily overwhelm enemy heroes—even ones with large health pools due to how many Meepo clones can exist on the map at once. Ransack, on the other hand, is a passive ability that steals health from enemy units, healing every Meepo in the process. Ransack helps keep each Meepo nice and topped up, allowing him to last through long teamfights.

In the hands of an inexperienced pilot, Meepo falls flat very quickly—especially if Divided We Stand’s shared experience/gold mechanic is not utilized to its fullest potential. Moreover, individual Meepo clones that newbies leave behind can easily be picked off, causing a very untimely death. But in the hands of a practiced Meepo player, the hero can be extremely devastating and difficult to deal with. In fact, Meepo is one of the biggest “pub stompers” in the game, and is almost unstoppable in the lower tiers of ranked play if played well.

Despite the most difficult hero in the game, Meepo’s skill build is surprisingly simple and easy to remember. Poof should be the first thing you take, as it is a very cheap spell with flash-farming capabilities. It is also what you’ll be using to clear creep stacks in the jungle, further fueling your level progression. Do note that unlike most other ultimates in Dota 2, Divided We Stand can be leveled up at Levels 3, 10, and 18—as opposed to 6, 12, and 18. Thus, we recommend holding onto your second skill point until you hit Level 3, so that you have two points in Poof then one point in Divided We Stand.

When you hit Level 4, take one point in Earthbind—which can help you secure early kills should your supports rotate to your lane. From there, your goal is to max out Poof, while getting a value point in Ransack at Level 6. Earthbind will take second priority from there, followed by Ransack. Be sure to take Divided We Stand whenever you can, as it gives Meepo a huge boost in power at each level.

Thankfully, Meepo’s typical item build is also simple enough to remember and execute. Thanks to the power of Poof and its stacking magic damage, Ethereal Blade will generally be the best pickup for Meepo in almost any game. Before getting to that point, though, stat-boosting items are in order. We recommend getting a pair of Power Treads and some Wraith Bands to start with. Wraith Bands in particular increase your attack speed in the early game, which means more opportunities to restore health with Ransack. Power Treads, on the other hand, allow you to be very efficient with your health and mana.

Once those are out of the way, Blink Dagger is next. Blink Dagger allows you to jump right next to someone, pin them to the ground with Earthbind, then lay into them with Poof and Ransack right after. It can also be used as an escape mechanism, though obviously the true Meepo will have to be out of harm’s way for this to work. As such, more often than not, Blink Dagger will be an initiation tool.

Upon purchasing a Blink Dagger, you will want to start going around the map helping set up kills for your team. This isn’t your first priority, though, so if your team can do fine without you for a while we suggest keeping your farming pace going. Remember, you’ll want to be a few levels ahead of the enemy team, so staying in the jungle and clearing creep waves should be your focus.

Going into the late game is when you’ll want to build up your Ethereal Blade. Not only does it give you a ton of extra stats, but it also improves Poof’s damage by a huge amount. It is also great versus right click carries that don’t carry a Black King Bar or a Linken’s Sphere, as they will be completely unable to retaliate unless they have some sort of ability that deals magic damage.

After Ethereal Blade is done, the floor opens up for situational pickups. The most common item after Ethereal Blade is Scythe of Vyse, which gives Meepo even more stats and a ton of mana and mana regeneration to work with. Most importantly, however, it gives him an actual hard disable, something that Earthbind isn’t. Blinking in and immediately using Hex on a target basically spells their quick demise, and is a combo that should be used as often as possible. Eye of Skadi is another attractive option, thanks to the double UItimate Orb recipe and the fact that its passive slow allows for more Ransack strikes.

Against enemies with fast escape mechanisms, a Bloodthorn may be in order. Not only does it completely silence a target, but it also synergizes with your clones thanks to its damage amplification mechanic. If your target cannot purge the debuff off, you will melt them completely with your regular attacks.

Here’s where things get quite complicated, as there isn’t really a cookie cutter method to pulling off Meepo’s combo. For the uninitiated, there exists the Tab method, which involves hitting Tab to cycle between Meepo clones in order to cast spells that are off cooldown. This is arguably the simplest way to do it, as it doesn’t really take much preparation beforehand.

Some will, of course, argue that this method is slow, so you may want to bind each individual Meepo to control groups (hold CTRL then press one of the keys in the number row to assign a Meepo to that number). This gives you somewhat finer control over each clone, though there isn’t really a way to tell which clone is assigned to which number at a glance.

Regardless of which method you choose, though, Meepo’s combo is pretty much the same between either one. Blink next to your target, then quickly root them with Earthbind. Command each Meepo to then Poof to the real one, then finish them off with regular attacks. If you have Scythe of Vyse and/or Ethereal Blade, make sure to use those as well before casting Poof.

Because of Divided We Stand’s weakness, picking heroes with area of effect nukes or disables works well against Meepo. Disabling several clones at a time greatly reduces Meepo’s ability to deal damage and keep your teammates pinned down, after all. Slardar, Magnus, Earthshaker, and Sven all fit this bill, and should always be in the back of your mind when going up against a Meepo player.

Barring such abilities, heroes with cleave mechanics are also good choices versus Meepo. Pangolier, Kunkka, Ember Spirit, and almost any other natural Battle Fury wielder can mow Meepo’s clones down in a teamfight, removing him from the picture swiftly and cleanly. Likewise, Maelstrom/Mjollnir carriers such as Drow Ranger, Sniper, and Windranger can zap his clones down with auto attacks.

In general, though, countering Meepo involves more than just picking heroes that can give his clones a bad day during large-scale engagements. After all, Meepo’s greatest strength is his fast flash-farming speed and ability to soak up experience from multiple places on the map at once, so we suggest warding his jungle often in hopes of catching out one of his clones. If your team is able to slow down his farm often enough in the laning phase and the mid game, dealing with Meepo becomes a lot easier. Your carry can also use this time to catch up to Meepo, or even outpace them in the GPM game.