Razor, the Lightning Revenant, is a ranged agility hero that is typically played as one of the three core positions in Dota 2. Empowered by the Underscape, Razor wields thunder and lightning in his wicked arsenal of abilities, shocking his enemies into submission with far-reaching rings of electricity and close range bolts alike.

His first ability Plasma Field projects a wave of lightning that radiates outward from his position, dealing damage to any enemy units caught in its wake. The further they are from Razor when the wave hits, the more damage it deals. Upon reaching its maximum radius, Plasma Field contracts to return to Razor—dealing a second instance of damage along the way. In addition, enemies hit by the field are slowed by up to 40 percent. 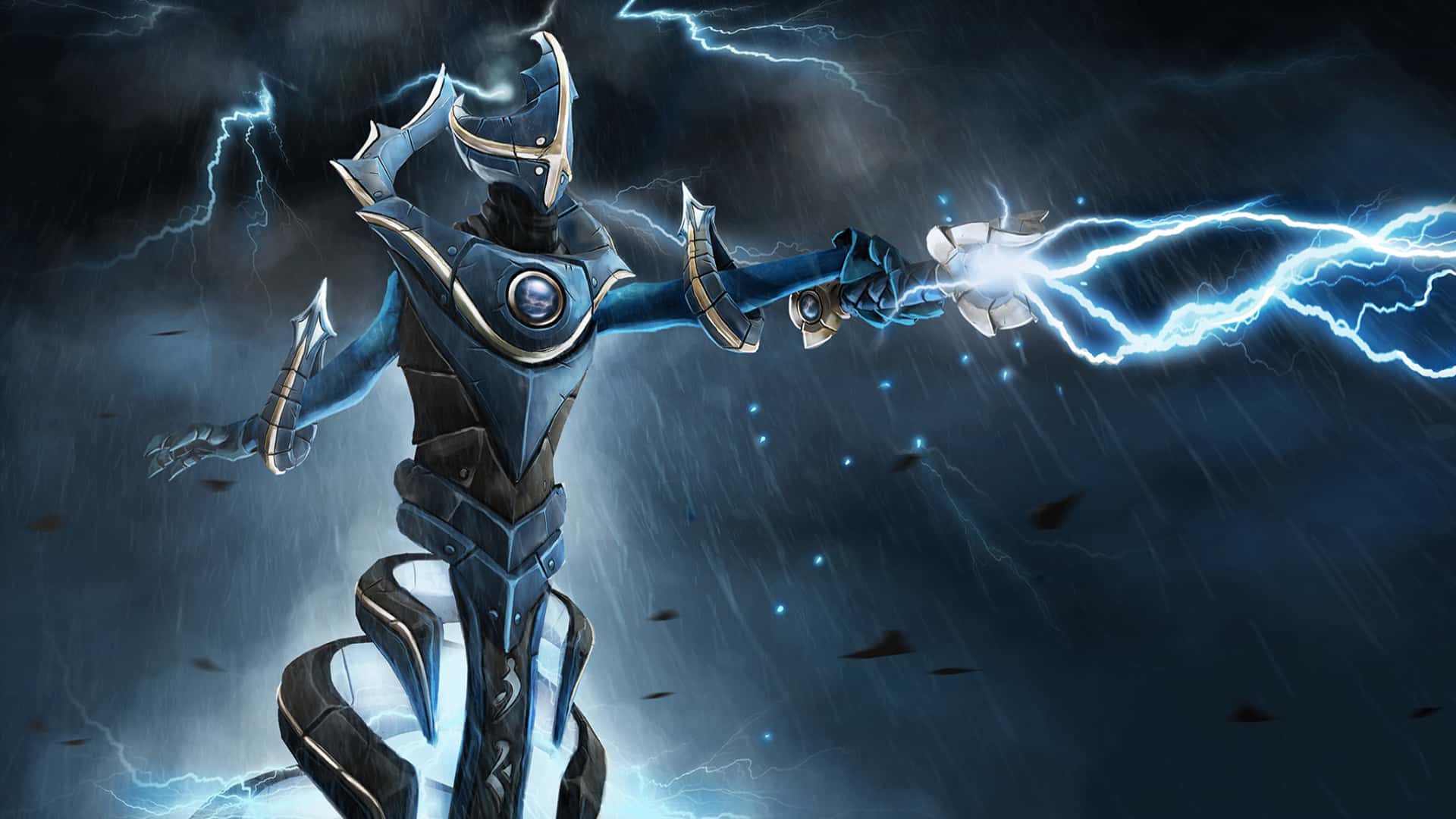 His second ability, called Static Link, creates a tether between Razor and a single targeted enemy hero. As long as Razor is within at least 800 range of the tethered hero, Static Link will steal that hero’s attack damage over a period of time, adding it to Razor’s own. The link lasts up to eight seconds, allowing Razor to steal more than 200 points of damage if he manages to get the full duration off. This ability alone makes Razor an excellent anti-carry, while also turning himself into one temporarily during engagements and teamfights.

Unstable Current, his only passive ability, gives Razor a small boost in movement speed, while also occasionally zapping enemy units in a 500 unit radius for minor magic damage. This essentially makes it work like a free Radiance, though its overall DPS is much lower due to the interval between each instance.

His ultimate ability Eye of the Storm summons a thundercloud above Razor, which strikes enemy units every half second with lightning bolts. These bolts deal minor magic damage, while also reducing the armor of those it hits. The caveat, however, is that the cloud only seeks the unit with the lowest health among those in its radius—except when Static Link is active. In case of the latter, Eye of the Storm prioritizes the hero that Static Link is on.

From this, it’s clear that his kit is meant to be used from medium to close range, for the most part. This means that Razor’s itemization isn’t like traditional agility carries, who build damage items in order to increase their output in the late game. Instead, Razor is all about building items that make him move faster and withstand large amounts of punishment, so that he can keep his prey within range of his abilities. Static Link will give him pretty much all the physical damage he needs in teamfights, while his other abilities contribute magic damage and other useful properties.

But with his main strength comes a few weaknesses that can be exploited by the enemy team. For one, Razor isn’t a true hard carry, which means that deep late game situations generally don’t favor him. Razor would much rather end the game at around the 40 to 50 minute mark, while his abilities still allow him to go toe to toe with enemy carries. Past that, his impact falls off dramatically. He also farms extremely slowly for a core hero, which can be a problem if he encounters setbacks in the early game. If he is unable to get the ball rolling quickly, Razor will find himself fighting an uphill battle the rest of the game.

Regardless of his chosen role, Razor only really has one generic skill build to worry about. Due to the poor scaling of Unstable Current, maxing out Static Link and Plasma Field in the laning phase is a much better idea than investing points into an ability that doesn’t do much in the early game. Static Link should generally be the skill you take first, thanks to its cheap mana cost and utility in the lane. It also helps when contesting bounty runes, as it dissuades heroes from sticking around the area for too long.

Plasma Field, on the other hand, is your only farming ability, even if it isn’t exactly the most potent accelerant out there. You can use it to harass in the lane somewhat, of course, but its mana cost versus Razor’s mana pool means that you won’t be able to spam it as much as you’d like. It is, however, useful when running away from early gank attempts, thanks to the built in movement speed slow.

Eye of the Storm should be taken at every ultimate level, in order to maximize its effectiveness as soon as possible.

As mentioned in the introduction to this guide, Razor isn’t like traditional agility carries in terms of itemization. Rather than shooting for attack speed or raw damage, we recommend opting for survivability and movement speed choices. This is because Static Link will be your bread and butter ability in teamfights and gank attempts, and will provide you with the attack damage that you need. The rest will be taken care of by your abilities, particularly Eye of the Storm.

In the early game, things like Phase Boots, Drum of Endurance, and Sange and Yasha are what you should aim for. Phase Boots allows you to catch up to your Static Link targets in the laning phase, while Drum of Endurance provides you with even more movement speed and a nice attribute bonus. With the extra health and mana from the latter, you are almost sure to find more opportunities to get into fights early and often—which is important for Razor’s momentum-heavy design. Sange and Yasha, meanwhile, does all of this passively—while also providing a handy 16 percent of status resistance.

Going into the mid game, you will want to purchase a Black King Bar next. Razor is a lot like Gyrocopter, in the sense that he needs to be in the thick of things to really contribute in a teamfight—which makes him a prime target for stuns and disables of all sorts. Black King Bar solves this problem in one fell swoop, while also giving you a small boost in health.

And that’s pretty much it for Razor’s “must have” items. The late game is where things really open up for him in terms of item choices, which you can mix and match depending on both teams’ drafts as well as the situation at hand. One of the most popular items for Razor in the late game is Aghanim’s Scepter, which causes Eye of the Storm to strike more often. It will also strike buildings with the upgrade on, which helps immensely when taking objectives and sieging high ground. You might also want to consider purchasing a Butterfly, whose evasion makes you even better as an anti-carry while also significantly increasing your own damage output.

Pickups that provide more utility for your team are also solid options. Shiva’s Guard can really turn the opposing carry’s day into a living nightmare, thanks to its attack speed slow aura. Assault Cuirass synergizes supremely with Eye of the Storm, while also helping to keep your teammates alive thanks to the armor aura. Eul’s Scepter of Divinity increases your movement speed and mana regeneration, while also allowing you to keep targets in place so you can maximize Static Link’s drain time. Of course, it will start to lose relevance later in the game, when enemy heroes start carrying Black King Bars and Linken’s Spheres.

Razor’s combo in a teamfight is very simple, and shouldn’t prove to be a complicated matter to all but the newest of players. As Razor isn’t really an initiator, you will generally have to wait for one of your teammates to start the engagement before you make your move. Once they do, turn on Eye of the Storm, then activate Plasma Field as you walk towards your target. When you are within range, use Static Link on your target (preferably a carry, of course), then use whatever items you have in your inventory to stay on them as long as possible.

Keep chasing your target until they are either out of range, or they die. Rinse and repeat as your cooldowns allow, and make sure to use the stolen attack damage against the enemy team.

Because of his limited range and resulting ineffectiveness if he is unable to stay close to his target, picking particularly mobile heroes against Razor is often a good idea. Heroes with blink abilities such as Anti-Mage and Queen of Pain have no problem getting away from Razor, being able to break Static Link’s effect with the press of a button. Similarly, mid heroes notorious for being slippery in their own ways such as Puck and Storm Spirit care very little about Razor’s skills.

Illusion-based heroes also destroy Razor in the mid to late game, confusing him with their mirror images while also dealing tons of physical DPS. Terrorblade, Phantom Lancer, and Chaos Knight in particular can all deal with him extremely well. As for non-illusion carries, those that can outrange him or otherwise stand and fight strike fear into Razor. Sniper can kite him to infinity and beyond, Slark can go toe to toe with him thanks to Essence Shift, and Outworld Devourer’s damage output is dependent on Arcane Orb rather than his regular attack damage.