Rhasta, the Shadow Shaman, is a ranged intelligence hero known for his large arsenal of hard disables, and ability to push towers with summoned units. Wielding voodoo powers similar to that of Witch Doctor, Shadow Shaman is all about cursing his opponents, transforming them into animals and keeping them in place with ethereal shackles.

Rhasta is blessed with one of the longest single target disables in the game, in the form of his signature ability Shackles. At max level, Shackles can be channeled for up to five seconds, which is typically more than enough time for his teammates to come in and unload their abilities on the helpless hero. It does, however, have a rather short cast range of 400 units—and being a channeling spell means that it can be interrupted by other stuns or disables. 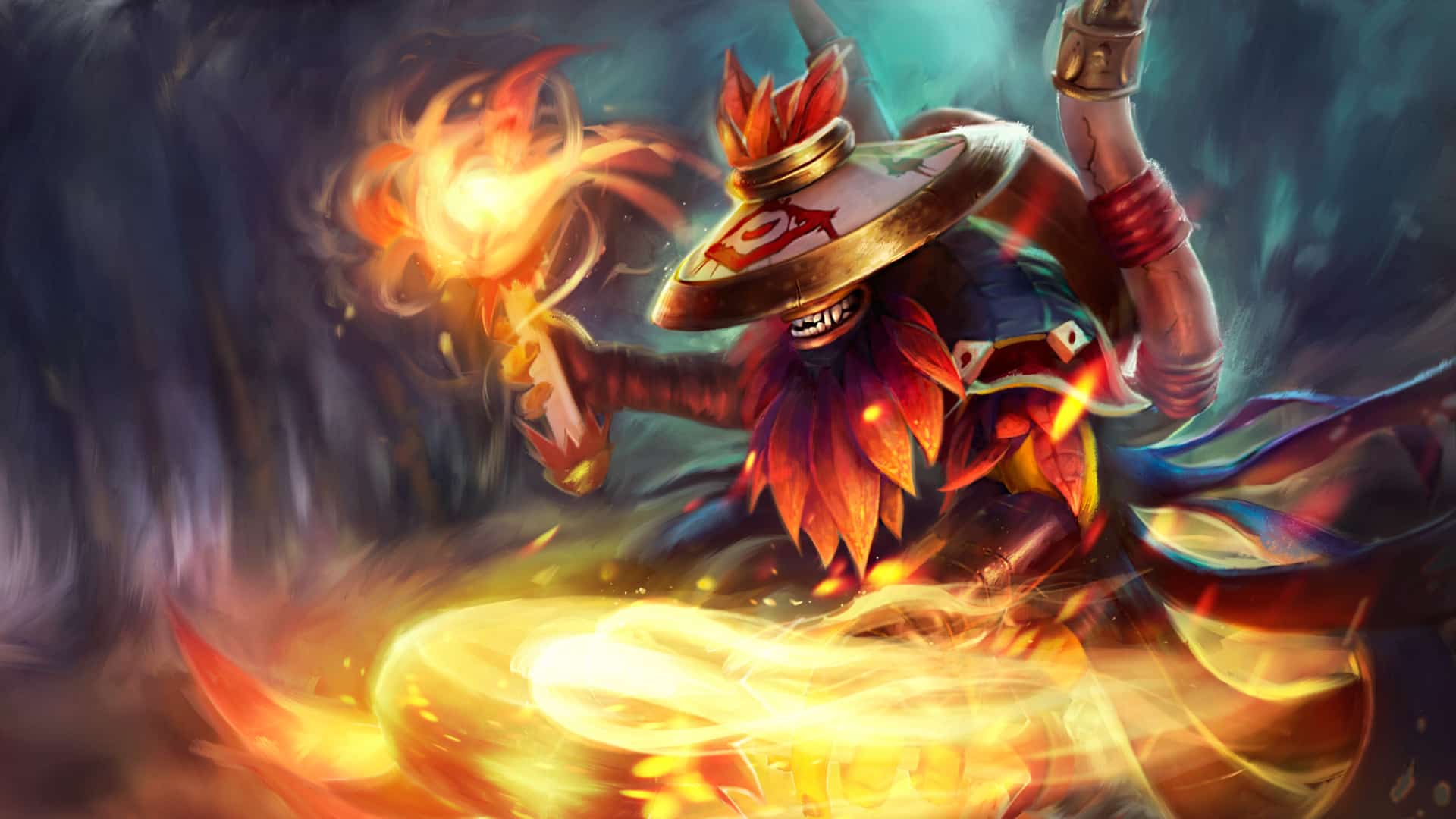 Fortunately, Shackles isn’t all that Rhasta has in terms of utility. He also has Hex, which transforms the target unit into a chicken for up to four seconds at a time. When transformed, units are unable to cast spells, use items, or even attack normally. They also move at a drastically reduced rate, making it much easier to chase them down for the kill.

Rounding out his kit is his area-of-effect nuke, called Ether Shock. Ether Shock blasts all units in a cone in front of Rhasta with lightning, dealing up to 320 damage on impact. Aside from its obvious application in teamfights, Ether Shock is also used to clear creep waves, earning large sums of gold in the process. Of course, you should normally only be doing this in the late game, after your team’s core heroes secure their own items.

Rhasta’s ultimate ability, Mass Serpent Ward, summons ten immobile wards that deal up to 100 physical damage per shot. The wards are summoned in a circular formation, making it easy to trap enemy heroes within. More importantly, though, Mass Serpent Wards can be used to push towers and barracks alike—and since they can be controlled, enemy heroes that dare step into their range in order to kill them will have to risk their health just to do so. This makes contesting Rhasta’s pushing power very difficult to do, unless the enemy team can somehow outrange the wards.

His entire kit is obviously designed towards support play, which Rhasta definitely excels at. His utility in the mid game is frightening, and his usefulness can extend well into the late game thanks to the power of Mass Serpent Ward and the fact that Shackles goes through magic immunity. However, he still suffers from the typical support weaknesses: Shadow Shaman is fragile, slow to move, and very mana dependent. He is also quite a bit more gold hungry compared to other supports, and needs items in order to be truly effective.

Shadow Shaman happens to be one of the best starting points for total beginners, thanks to his simple gameplan and straightforward abilities. Sure, Mass Serpent Ward requires a modicum of micromanagement, but even that isn’t too difficult to pull off. Fortunately, his skill progression is just as simple, and should be easy to remember for even the newest of players.

Your first skill point should typically go to Shackles first, as it is your longest disable even when it is at Level 1. Shackles can be used to punish heroes that try to contest the initial bounty rune spawns, especially if they dare to go in alone. Afterwards, you’ll want to max out Ether Shock, as it is your only effective form of harassment in the lane. It can also be used to help secure early kills in the lane, or help out in early rotations.

A single value point in Hex is all you’ll need in the laning phase. Investing heavily into it early on is not recommended, due to its high mana cost and mediocre scaling. Mass Serpent Ward should be taken at every ultimate level, however, in order to get its damage potential up to its limit as soon as possible.

As a support hero through and through, Shadow Shaman prefers items that help out the team as a whole, or increase his mobility in order to give him serious initiation power. Before getting to that point, though, there are some very cost-effective choices that he can pick up in the laning phase, to help tide him over while the team’s core heroes farm up.

Arcane Boots is the first item that comes to mind in this regard, as it gives Rhasta plenty of extra mana to work with, alongside the ability to restore his teammates’ mana pools. Purchasing Arcane Boots allows you to use Ether Shock more liberally, which can lead to kill opportunities if you play your cards right. Magic Wand serves much the same purpose, but has the bonus of also healing HP when activated.

Going into the mid game, Shadow Shaman will likely have to postpone any large purchases in favor of buying wards for the team, though this period ideally shouldn’t last very long considering Rhasta’s item dependency. Once you get past this phase, you’ll want to aim for either a Blink Dagger or a Force Staff, which will allow you to initiate with either Shackles or Hex. Failing that, we recommend something like a Eul’s Scepter of Divinity, which increases your mana pool, passive mana regen, and movement speed—while also giving you an extra disable. A Rod of Atos is also an excellent alternative, particularly against heroes like Storm Spirit.

In the late game, Shadow Shaman can opt for an Aghanim’s Scepter, though this should only be seen as a situational pickup more than anything. It is quite expensive, though its benefits to Mass Serpent Ward are undeniable. When combined with a Refresher Orb, Rhasta turns into one of the most potent pushers in the entire game, capable of taking objectives in a hurry.

As for other situational choices, there’s items like Scythe of Vyse, Glimmer Cape, Aether Lens, and Shiva’s Guard. When facing particularly irritating physical DPS carries, a Ghost Scepter would be good—though be wary of high damage nukes that will instantly delete you in ethereal form. An Octarine Core allows you to keep multiple targets disabled for ridiculously long periods of time, thanks to the cooldown reduction it provides.

Shadow Shaman’s combo is simple on paper, though executing it is a bit more complicated than it would first seem. This is because of ward trapping, which refers to caging enemy heroes within the circle that Mass Serpent Ward forms upon casting. It takes a bit of practice to get used to it, though it should come naturally after a while.

With that out of the way, Rhasta’s combo usually goes like this: use Blink Dagger or Force Staff to get in close, then cast Hex as soon as you get within range of your target. Cast Mass Serpent Ward on top of them to trap them inside, which is your teammates’ cue to start unloading on that hero.

Generally, you don’t want to use Shackles right away, so that you can maximize the duration of Hex—but depending on the situation you may have to do so or use it on a different target in a teamfight. It’ll be up to you to judge the situation, mostly. Of course, saving Shackles for a hero with magic immunity is ideal, so you’ll also want to consider that factor. Use Ether Shock on as many enemy heroes as possible, then mind your cooldowns to see when you can use your spells again.

Because Rhasta suffers from the typical support hero weaknesses, drafting around him is fairly easy. Heroes with magic immunity don’t care about Hex and Ether Shock, though bear in mind that he can still disable them with the use of Shackles. Picks that can quickly get in his face and burst him down before he can retaliate also work really well, with Tiny and Nyx Assassin being just two examples of such heroes.

Exploiting the fact that Shackles is a channeling spell is also a good idea. As soon as Shadow Shaman casts it, he becomes a high priority target, so be sure to call Shackles out to your team so that someone can interrupt the channeling. Even a short stun will do; just as long as you apply it, Shackles will end immediately.