Terrorblade, the Demon Marauder, is an illusion-based agility hero that starts out extremely vulnerable and fragile —but has the potential to grow out of control as a true hard carry. His most obvious weaknesses include his low base strength, low strength growth per level, and lack of a hard escape mechanism in his arsenal of spells. These make it hard for him to survive the early game, especially if his lane opponents take the time to harass him out of creep kill contention.

Thus, it takes a great deal of patience and care to farm with Terrorblade—and outside assistance definitely wouldn’t hurt either. If he does get the space he needs, though, Terrorblade can turn into an absolute juggernaut on the battlefield, commanding an army of illusions that strike hard from range with Conjure Image and Metamorphosis. His enemies turn on themselves with Reflection, slowing them down greatly and causing them to hit themselves with illusions. And should he be brought down to his knees, he can always simply Sunder his opponents—exchanging their life force with his in a near instant. 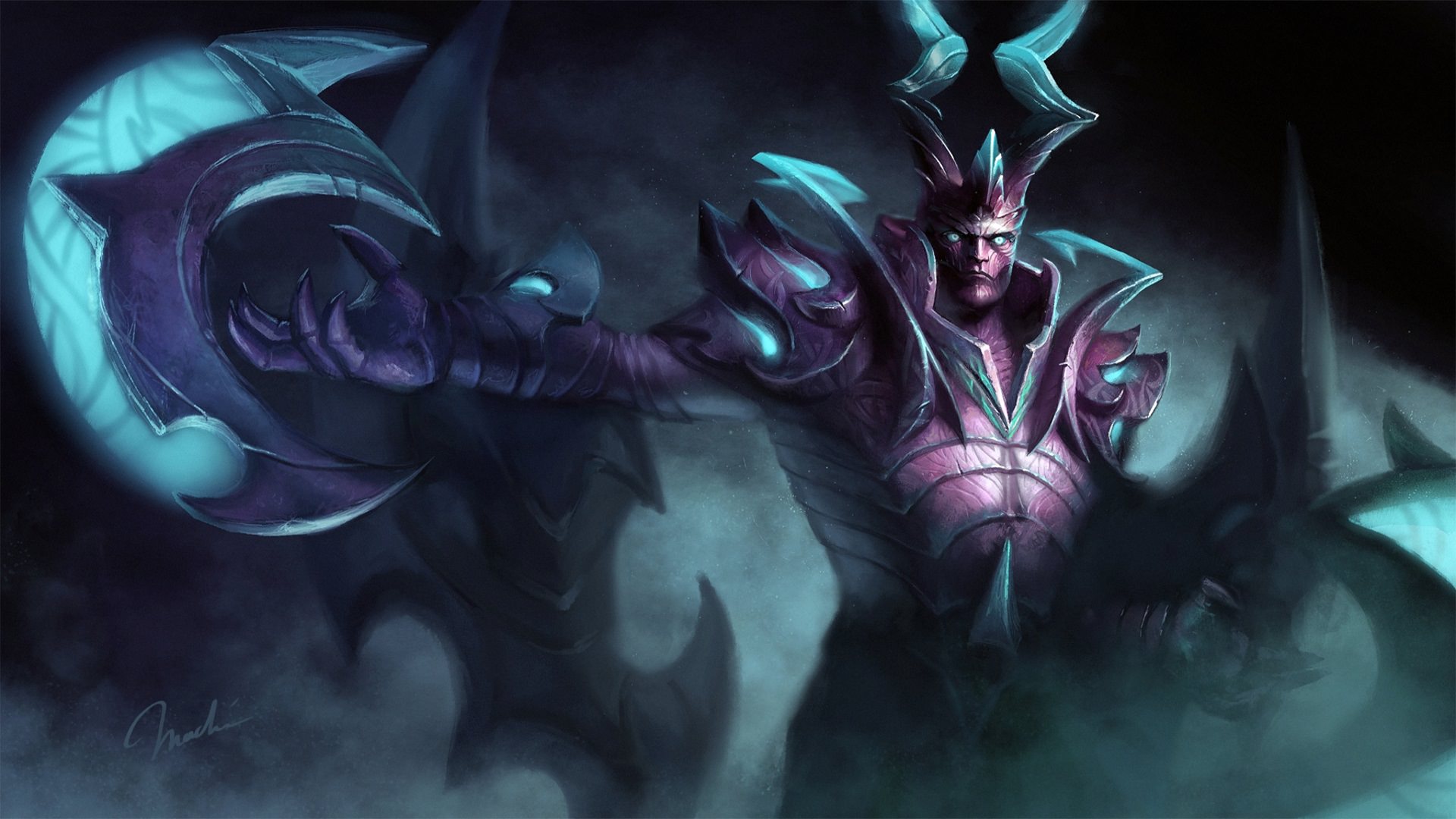 His kit makes him extremely hard to take down, especially in late game situations. Sunder turns the tide of battle in a snap, and his illusions confuse enemies while simultaneously giving him more physical damage per second. Reflection punishes heroes that rely on attack modifiers, and Metamorphosis gives him the range and damage he needs to carry his team to victory. He is also excellent at pushing objectives, thanks chiefly to his illusions and high damage output in the late game.

Though he may be difficult to play, Terrorblade rewards those that take the time to learn. Should you choose to sell your soul to him, he will take you and your team to the promised land.

Terrorblade is typically not meant to participate in engagements during the laning phase, but he is capable of doing so in a pinch. Metamorphosis lends pretty well to early fights, as does Reflection. It is for this reason that Metamorphosis should be maxed out first, with a value point invested in Reflection in between. Likewise, a value point in Conjure image to start with is a good idea.

As you approach Level 6, an important junction will present itself: whether or not to get Sunder right away. Getting Sunder at the first opportunity allows you to turn a fight around in the early game, yes, but generally speaking you shouldn’t even be involved in fights so soon. Also, Sunder is ridiculously expensive in the early game, both in terms of mana cost and cooldown. Consider skipping it until the mid game if there isn’t much action going on, but feel free to take an emergency point in it if you feel that the enemy team is going to gank you often.

Once Metamorphosis is maxed out, you’ll want to do the same for Conjure Image. Having better illusions in the mid game helps your farming pace and when taking objectives with your team, after all. Your illusions will assist both in the lane and in the jungle, so try to have them up as much as possible.

Reflection should be maxed out last, as its scaling is somewhat dependent on your opponents’ attack damage and available attack modifiers. Also, the movement speed slow is a flat 20 percent throughout the game, which makes leveling it early on hardly worth it.

Because of his abysmal base stats (and thus abysmal health and mana pools), Terrorblade will typically require items that shore up this weakness. Cost-effective stat sticks such as Ring of Aquila, Dragon Lance, Yasha, and later Manta Style all help in this regard, and will be core items for him in basically every game.

Ring of Aquila bolsters your already-formidable base armor, which protects you against physical attacks as harassment in the laning phase. It also increases your passive mana regeneration, which helps when it comes to producing illusions often. Dragon Lance is an obvious choice, as it extends Terrorblade’s attack range when he is in Metamorphosis. This can, of course, be paired with a Force Staff later on to make a Hurricane Pike, which also gives Terrorblade a much-needed escape mechanism.

Yasha gives you more attack speed and movement speed, with the latter being important for positioning. It also directly influences your physical DPS. Once turned into a Manta Style, you also get a quick solution to silence effects, which can prove fatal to a hero with an all-active kit. And of course, more illusions means more damage, which means an easier time carrying your team.

Even your luxury items will be all about pumping your stats, with the possible exception of Butterfly. Eye of Skadi gives you a magic immunity-piercing slow, which all of your illusions can use. You get a heap of extra stats with it, too. Satanic gives you massive lifesteal upon activation, and provides a way for you to survive teamfights without having to rely on Sunder all that much.

Terrorblade’s rotation is a bit more complicated than it might seem; it isn’t just a matter of using Metamorphosis right away when engaging in a teamfight or positioning yourself to take an objective. This is because Metamorphosis instantly turns you and all of your illusions in a 900 unit radius into your demon form—which means that it is far more optimal to summon all of your illusions before transforming.

Basically, you’ll want to have all your illusions with you, both from Conjure Image and Manta Style, before hitting the W key. This ensures that you are at maximum power before the engagement begins. Once it does, your combo becomes a lot simpler: use Reflection on as many enemy heroes as possible, then cast Sunder if need be.

Due to his minuscule health pool, Terrorblade succumbs to heavy magic damage in the early game. This is perhaps the best way to keep him down in the laning phase, so consider drafting heroes with high-damage nukes or ones that can effectively harass him with magic damage. Magic abilities also ignore his high base armor, which is his primary method of surviving the early game. Picks like Silencer, Venomancer, and Viper will make life in the lane a living hell for Terrorblade.

Also, as an illusion-dependent hero, heroes that can clear his army in a short amount of time also work well against him. Ember Spirit with his Sleight of Fist, Sven with his Great Cleave, and Timbersaw with all of his spells are just some examples of heroes that Terrorblade really does not like going up against.

And finally, consider drafting good counter-push heroes, which can easily deal with his Conjure Image split pushing shenanigans. Tinker and Ember Spirit fit this description, and so does Keeper of the Light. Tinker in particular has a ridiculously easy time clearing out Terroblade’s illusions, thanks to the fact that he can Rearm his Boots of Travel in order to shove creep waves back.