Rizzrack, the Timbersaw, is a melee strength hero that actually relies more on his spells than raw physical power to deal the bulk of his damage. Armed with a whole host of buzzsaws designed to cut trees in massive numbers, his abilities are quite dependent on using the trees that can be found all over the Dota 2 map.

His first ability Whirling Death deals up to 180 pure damage in a small radius around him, while also reducing the attributes of any heroes caught in its area of effect. While 180 damage does not seem like a lot on paper, the fact that it takes away a hero’s stats and its damage type is pure means that it hurts more than most players would expect. Whirling Death is also ridiculously good against other strength heroes, who rely on their primary attribute to give them additional health as well as attack damage.

His second ability Timber Chain fires a grappling hook at the targeted point, which travels up to 1400 range from Timbersaw himself. The hook can latch onto a tree, pulling Timbersaw over to it while dealing damage to any enemy units that he passes through along the way. Like Whirling Death, Timber Chain also deals pure damage, which means that the ability completely ignores magic resistance and magic damage blocking mechanics. Needless to say, Timber Chain is what gives Timbersaw some much needed mobility, and is most often the method which he uses to get close enough to his targets to use Whirling Death.

Supporting his two non-ultimate abilities is his passive skill Reactive Armor, which gives him bonus armor and health regeneration every time he takes damage from any source. This ability alone makes him very durable and difficult to kill in the early game, while providing him with a way of shrugging off small attacks in the mid to late game. He is therefore quite the capable laner, as he cannot be harassed out of the lane so easily. 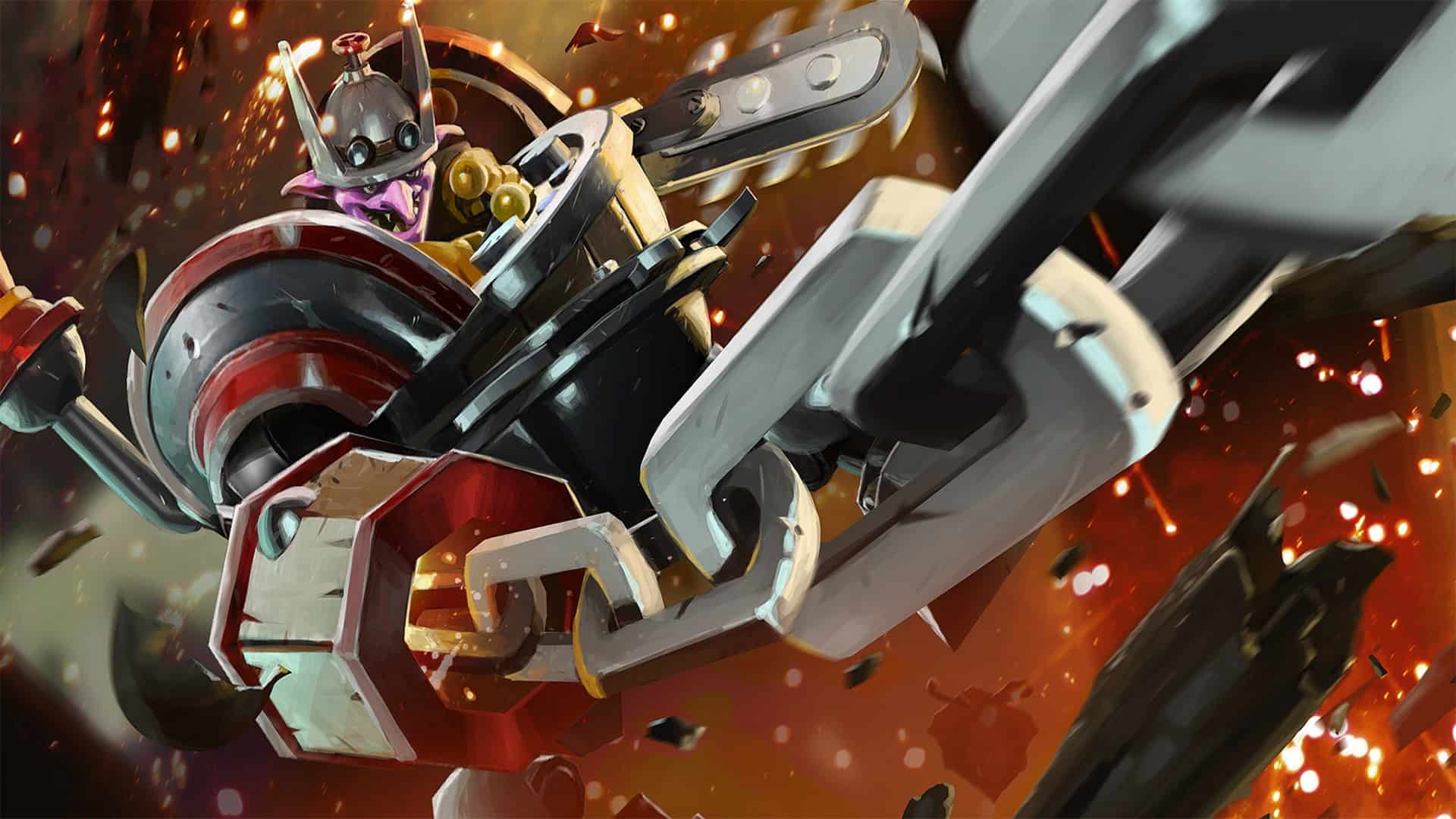 And finally, there is his ultimate ability Chakram, which launches a spinning saw blade at the targeted point. Any enemy units hit by the blade on the way to its destination will take up to 180 pure damage. The blade will then stop at the targeted point, spinning in place and dealing a significant amount of pure damage over time to any enemy unit that comes into contact with it. While it is spinning in place, Chakram drains a fixed amount of mana per second from Timbersaw, and will automatically return if he runs out of mana. Timbersaw may also opt to manually call the saw blade back himself, which again applies the 180 pure damage upon passing through enemy units.

Chakram also slows down units that it is in contact with, drastically reducing their movement speed until they are able to escape. This movement speed slow worsens over time, reducing speed even further for every five percent of health that the unit is missing. Left unchecked, Chakram can wreak absolute havoc on entire teams, gradually tightening its grip on them until they are unable to get away.

His entire kit makes him extremely dependent on proper positioning, and he requires quite a bit of game sense as well in order to maximize his impact. As such, he is generally not recommended for those new to the game, and is pretty much reserved for those with more than just a few games under their belts. Fully mastered, though, Timbersaw can be a handful on the battlefield, zipping between treelines and destroying attribute-dependent heroes.

Due to his nature as a low attack speed melee hero, surviving the lane as Timbersaw boils down to using Reactive Armor and Timber Chain to keep him safe throughout the laning phase. Reactive Armor is there to provide health regeneration or otherwise discourage harassment through physical attacks, as it can quickly build stacks if your lane opponents aren’t careful. Timber Chain is your only escape mechanism, so of course it should have at least one point invested in it in the early game.

Reactive Armor should be maxed out first, as Timbersaw is typically played in the offlane where the goal is to simply not die. Timber Chain will follow suit after, in order to maximize its range and damage as soon as possible. The increased mobility that it gives Timbersaw should not be undervalued, making it quite an important mid game investment.

Whirling Death is saved for last, due to the percentage-based scaling of its attribute removal mechanic. It is simply way more effective in the late game when there are more stats to remove in the first place, and so it should be left alone until then apart from the first level in the early game. Chakram, on the other hand, is too important to be ignored, so it should be skilled into at every ultimate level.

In order to address Timbersaw’s insatiable hunger for mana and his small health pool, we recommend getting items that either give him flat increases in both departments, or augment his strength and intelligence. In the early game, Soul Ring and Arcane Boots provide more than enough juice for him to use, with the former in particular synergizing very well with Reactive Armor. The health lost from using Soul Ring can easily be regained by pulling aggro from some of the neutral creep camps in the offlane, or by cutting the offlane creep wave as it walks towards your friendly tower.

After solving your mana issues in the laning phase, it’s time to get some actual passive regeneration on the board. Pickups such as Hood of Defiance, Eul’s Scepter of Divinity, and Bloodstone are all excellent choices which can fill specific roles in certain situations. Hood of Defiance is of course perfect against magic-heavy drafts, which are typically composed of heroes that ignore Reactive Armor by dealing magic damage to Timbersaw. Eul’s keeps Blink Dagger carriers from escaping quickly, and can also be used to set up Chakram with ease.

Bloodstone covers both health and mana regeneration, while also allowing you to heal yourself in a pinch provided you have the mana to support the Bloodpact active ability. Do note, however, that Bloodpact is not a burst heal, and teams with sufficient burst damage can still kill you if you are at low HP.

Towards the late game, you will generally want to pick up items that lean towards the utility side of things, rather than continue to boost your stats willy-nilly. Lotus Orb is the first such item that comes to mind, as it prevents enemy heroes from casting targeted spells on you or your teammates without suffering the same fate themselves. Shiva’s Guard is always a good choice for intelligence heroes that rely on area-of-effect damage, and can disrupt entire teams thanks to the movement speed slow built into its active component. Aghanim’s Scepter gives you twice the number of Chakram blades to play with, though keep in mind that this does come at the cost of more mana consumption.

Situational pickups will follow afterwards. Blade Mail is almost perfect for Timbersaw, and is valuable against teams that have abilities that deal large amounts of damage at once. This item alone can stop the enemy team’s momentum cold in its tracks, so we suggest keeping it in the back of your mind against specific drafts. Octarine Core reduces your cooldowns alongside the Level 20 talent, which also directly influences how much damage you can deal in a teamfight. The spell lifesteal is also great for keeping yourself topped up in long engagements. On the other hand, Heart of Tarrasque can be useful if you find yourself having to weave in and out of combat often.

Timbersaw’s rotation in a teamfight isn’t the simplest in the world, but it isn’t that difficult to master with practice either. Generally you want to open up with Chakram in order to slow down your targets, and prep them for the Timber Chain into Whirling Death combo. The latter two abilities alone can bring heroes down to half their health in a matter of seconds, especially when followed up with the Chakram’s pass and return damage.

Of course, you’ll want to use any active items in the process, such as Shiva’s Guard, Lotus Orb, Pipe of Insight, and whatever else you might have. Rinse and repeat once your abilities come off cooldown, chasing stragglers down with Timber Chain and Chakram as needed.

Timbersaw’s dependence on mana happens to be his biggest downfall, particularly against heroes that can truly abuse this weakness. Bane, Lion, Anti-Mage, Nyx Assassin, and even Invoker can strip him of his precious mana, thus disabling the entirety of his kit and leaving him with nowhere to run. He is practically dead to rights without any mana, so we recommend considering heroes with mana drain mechanics against him.

As mentioned above, heavy magic damage also gives Timbersaw a headache due to his low base health and reliance on physical armor for survival. Burst mages like Lina, Tinker, Necrophos, and Zeus all cut straight through Reactive Armor and aim directly for his HP instead. With enough nukes, Timbersaw will eventually fall—though be wary of Linken’s Sphere and/or Lotus Orb.

Likewise, silences can put a hard stop to Timbersaw, especially those that last for several seconds at a time. Without access to his abilities, Timbersaw quickly turns into a sitting duck—and can either be ignored in favor of aiming for his teammates or isolated and picked off before he has a chance to respond or escape. Heroes like Silencer, Skywrath Mage, and Doom can all shut him down quite easily with their respective silence abilities. Orchid Malevolence carriers such as Queen of Pain, Storm Spirit, and can also ruin his day in much the same fashion, by cutting him off from his spells without so much as a warning beforehand.