Dirge, the Undying, is a melee strength hero that serves as a massive nuisance and space creator in team fights, using his arsenal of powerful debuffs and curses. His kit revolves around punishing enemy heroes for not concentrating their spells and attacks on him, while tanking all of their damage for his teammates should they choose to focus him down.

This is done primarily through his signature ability, Tombstone. Upon activation, Undying summons a large obelisk at the target point, which spawns zombies next to every enemy unit within a radius of 1200 units. The zombies attack these units, applying the Deathlust debuff in the process. Those affected by Deathlust will have their movement speed reduced by seven percent, and cause the zombies to receive a movement speed and attack speed bonus should they fall below a certain health threshold.

The obelisk itself stays for up to 30 seconds at a time, unless it is destroyed by enemy heroes. Doing so, however, is very difficult—especially for teams that don’t have heroes with high attack speeds. This is because the tombstone requires a fixed number of regular attacks to kill, regardless of how much incoming attack damage it receives at any time. Thus, Tombstone presents the enemy team with a dilemma: either they focus their efforts on destroying the tombstone, or ignore it completely and suffer the consequences. 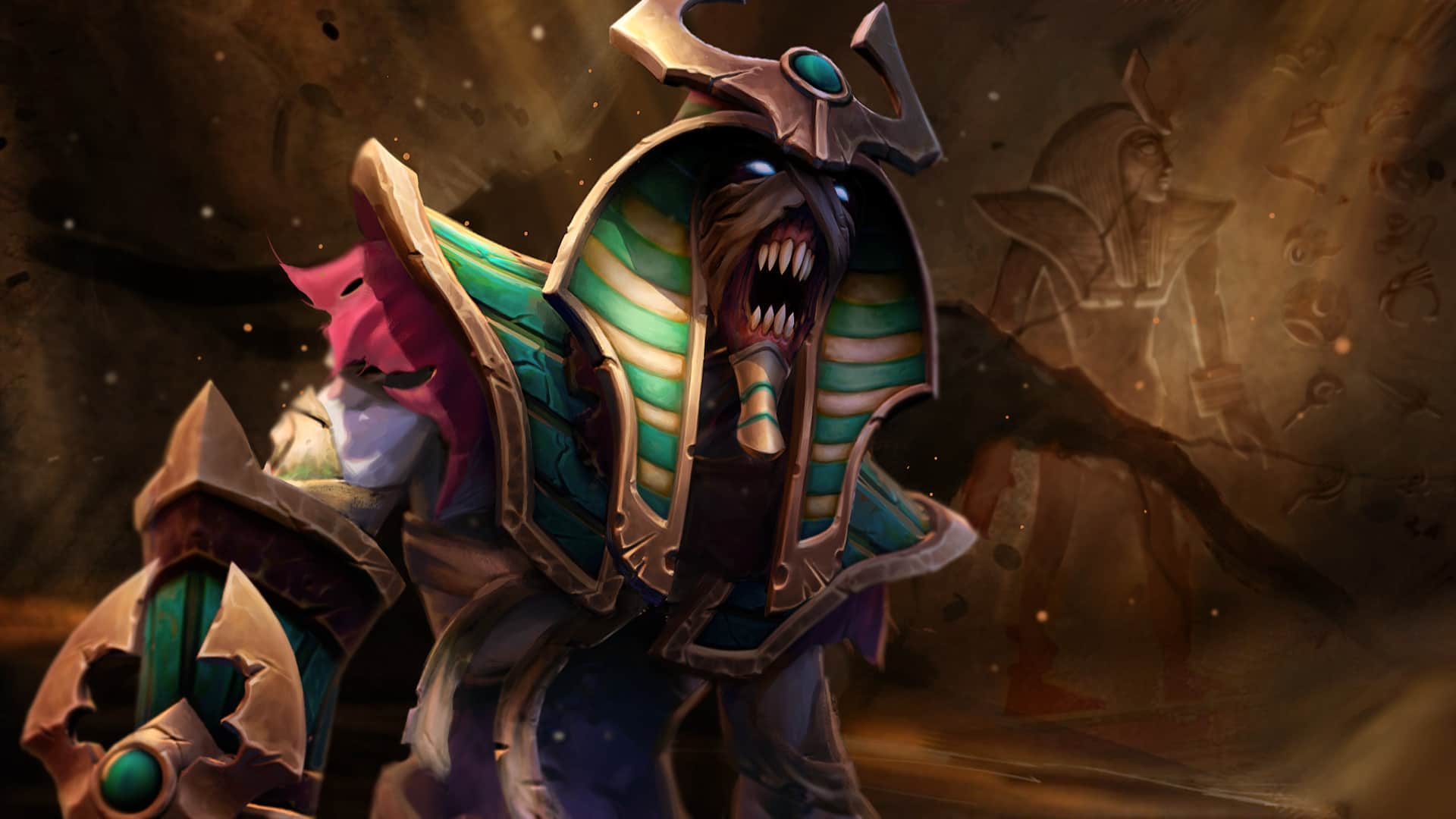 The rest of his kit gives him even more debuffs to play with. Decay saps the strength attribute of every enemy hero in its area of effect, causing them to lose maximum HP while also taking damage at the same time. Every point of strength stripped away by Decay then goes to Undying, thus making him stronger with every use of the ability. Soul Rip drains the life force from all units within a 1300 unit radius, which Undying can then use to either heal a single allied unit or harm an enemy. The more units (including Tombstone zombies) there are in the immediate area, the stronger the heal/nuke. And finally, his ultimate ability Flesh Golem turns Dirge into a rotting juggernaut, which greatly slows enemy units in a small area nearby while also causing them to lose a percentage of their health per second.

Dirge’s design make him an excellent tank and great for linueps that look to get aggressive in the early game. A few stacks of Decay is more than enough to bring certain heroes down to critical health, which makes them ripe for the picking, so to speak. His presence in teamfights also cannot be understated, and can be compared to that of other heroes like Phoenix or Tidehunter. But even with his unholy strength, there are ways to put Undying down. Exploiting his middling strength gain and downright terrible agility gain is one—and because Undying has to shore both weaknesses up with items, delaying his farm with frequent ganks can set him back significantly.

Having no hard disables also means he has no way of keeping mobile heroes in place, which means he has trouble against drafts with instant escape mechanisms. Exercising restraint in teamfights and knowing when to disengage can also force Undying into wasting his cooldowns, particularly with Tombstone and Flesh Golem.

Dirge’s skill progression can be deceptive and confusing to those unfamiliar with his playstyle, especially considering the power of Decay in the early game. At first glance, one would think that maxing out Decay as soon as possible would be a good idea, since it deals more damage and can be cast more often with more levels. But this is actually counterproductive in terms of enabling early dives and hero kill attempts, since spamming Decay only ends up dissuading your opponents from staying in lane. Moreover, higher levels of Decay cost more mana to cast, which Undying doesn’t really have a lot of.

Thus, his generic skill build keeps Decay at Level 1 in the early game. Most of the skill points you gain in the early game will be reserved for Tombstone, which is a much better investment due to its movement speed reduction and purpose as an irritant in early engagements. Tombstone is also virtually impossible to deal with early on due to heroes not having that much attack speed to start with, barring picks like Ursa of course. Like with Decay, though, Soul Rip should be left at Level 1, though mostly because its scaling really isn’t that great versus the increase in mana cost per level.

Flesh Golem, on the other hand, is good enough to take at every ultimate level, so we recommend doing so.

Fortunately, Undying’s item build is a lot simpler than his skill build, thanks to his singular focus and design when it comes to his gameplay. You want utility items, and lots of them. You want pickups that can help you and your team survive longer in five-on-five engagements, and prevent the opponent from running at full efficiency.

For the early game, you’ll want to purchase a pair of Arcane Boots, which greatly increases your mana capacity and allows you and your teammates to use your spells more often. Both aspects are equally important to Undying, who wants to leverage the power of Decay and Tombstone in order to secure kills in lane. With Arcane Boots, you get to cast Decay way more often, which can set your lane partner up for a dive attempt.

Undying can survive the laning phase with Arcane Boots alone, but the mid game is where your most critical timing window presents itself. We recommend building a Mekansm to gear up for this period, which combines nicely with Soul Rip to provide plenty of healing for your teammates when they need it the most. Later on, you can combine Arcane Boots and Mekansm into Guardian Greaves, which frees up an inventory slot and adds a handy dispel to the stack.

Afterwards, we suggest going for an Aghanim’s Scepter, which gives a massive (and we mean it) increase to how much strength is stolen by Decay—from four points to ten with each hero it hits. If you are able to hit even just three heroes in a teamfight, you instantly gain 30 strength, while taking away the same total amount from the enemy team. That’s more bonus strength than if you purchased a Reaver. The instant health increase also makes you way harder to kill, which means you get to use Flesh Golem’s aura far longer than you would otherwise.

Once your core items are complete, the situational pickups take center stage. Pipe of Insight is a popular choice, especially against magic-heavy lineups. Spirit Vessel provides more healing on top of what you already have, plus a way to disable natural or forced health regeneration against heroes like Alchemist and Doom. Blade Mail puts an immediate stop to anyone who tries to attack you, and can be deadly against teams that rely on area-of-effect abilities. Crimson Guard helps deal with physical damage, while Shiva’s Guard directly hamper’s carries by stripping them of both movement speed and attack speed. The latter also gives you plenty of armor to work with, and because of Undying’s abysmal agility gain he really needs as much armor as he can get. The health he gets from strength sometimes just isn’t enough, and so Shiva’s Guard places an extra layer of effective HP that Dirge really appreciates.

While it doesn’t exactly jump out as an immediate pickup for Undying, Scythe of Vyse actually works fairly well on him. Remember, Dirge does not have any hard disables to speak of, so having the Hex on hand can be really valuable against certain heroes. The mana regeneration is nice as well, as are the extra stats from the Ultimate Orb component.

Undying’s rotation in a teamfight is also not that complicated, with a large portion of his effectiveness revolving around good positioning of Tombstone. Generally speaking, though, you’ll want to start teamfights by activating Flesh Golem first, especially if you happen to already be near one or two enemy heroes. Immediately after, plant Tombstone down, preferably in a hard-to-reach place such as inside a nearby treeline or on the low/high ground depending on where the teamfight is taking place. You want your opponents to have to really go out of their way just to destroy it, after all, which in turn increases its longevity and the time it has to spawn more and more zombies.

From there, your job is to hit as many heroes as you can with Decay while slowing them down with the aura from Flesh Golem. Use Soul Rip to keep your teammates alive or to quickly secure a much-needed kill. If the enemy team tries to get rid of you first, make sure to pop Blade Mail to punish them for doing so.

Generally speaking, heroes that can exploit Undying’s large health pool do particularly well against him. Picks like Lifestealer, and Necrophos benefit from his durability, with the former hitting him for bonus damage through Feast and the latter using his missing health as leverage for a quick kill with Reaper’s Scythe.

On the flipside, heroes that benefit from there being many enemy units in the vicinity can also be great picks versus Dirge. Earthshaker’s Echo Slam is greatly amplified by the presence of zombies from Tombstone, though Earthshaker himself will have to be careful—lest his Blink Dagger be disabled by the zombies attacking him. Meanwhile, Gyrocopter can use Flak Cannon to quickly clear the zombies, which also nets him some extra gold. Luna does pretty much the same thing with her Moon Glaives. Alchemist can earn huge sums of cash just by having the zombies sit in his Acid Spray, thanks to the effects of Greevil’s Greed.

Preventing him from getting his spells off in the first place is always a good idea. Silencer, Night Stalker, and Skywrath Mage can all shut his mouth before he is able to respond, which effectively removes him from engagements until the silence effect expires. Orchid Malevolence carriers like Storm Spirit can likewise jump on top of him and silence him immediately, after which their teammates can follow up.