Dota 2 has had creeps in the game since its inception. Each of these little creatures serves a few key roles , with the most important one being sources of gold and experience. Without creeps, heroes would not be able to level up or purchase items—leading to rather unentertaining games of chicken where both teams try to just take potshots at each other.

There exists, however, a very special creep, which resides in a specific area of the map. We’re talking about Roshan, the Immortal, the big bad monster who lives in a pit in the river that splits the map into two halves. Unlike most other creeps which are quite weak and serve as food for heroes, Roshan is incredibly powerful, and will decimate most heroes in a one-on-one fight. He starts off with a whopping 6,000 points of health—which is way more than what most heroes and even entire teams can chew in the early game. What’s more, Roshan grows even stronger as time goes by, gaining additional maximum health, armor, and attack damage every minute.

Roshan’s home is located in the northwest section of the river, just above where the top rune spawns. Referred to as “Roshan’s pit” or the “Rosh pit”, the pit is a U-shaped cavern that is about 1,250 units long and 1,050 units wide. The pit has only one entrance, which faces the middle lane towards the southeast. Neither side can have any vision of the inside of pit without having actual units inside the area.

The pit and its resident 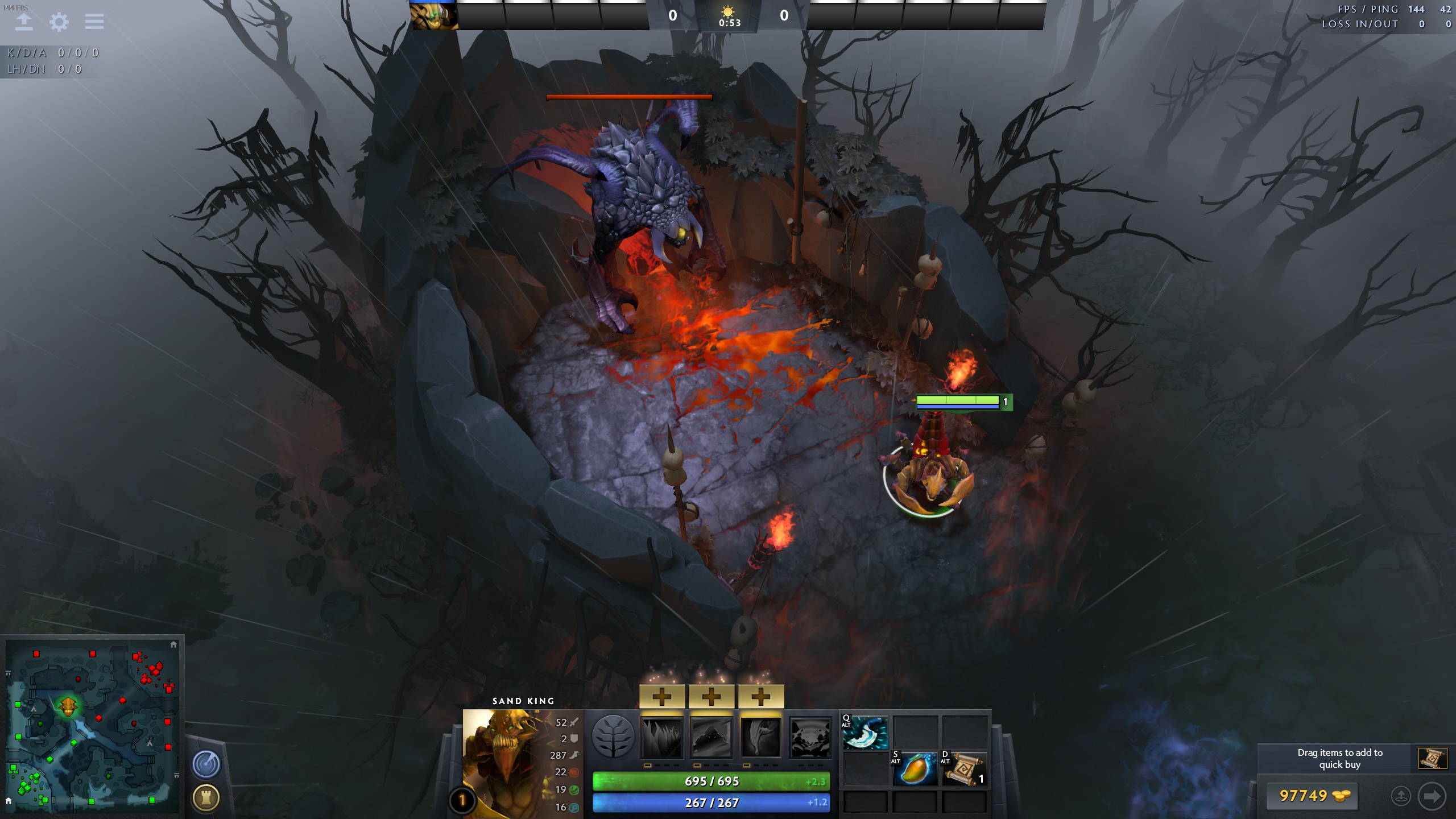 In addition, any units that stand inside the pit without any allied vision outside will have their vision restricted to the pit area—meaning they will not be able to see out of the pit without assistance. On the flipside, units that aren’t aligned with that hero will not be able to see into the pit, unless they bring their own units inside. Scan also does nothing when used on the pit itself, and will always show up green regardless of whether or not there are heroes within.

With regards to vision, however, there is one extremely important restriction to remember: Wards may not be placed directly inside the pit. This essentially eliminates one almost risk-free method of keeping tabs on Roshan, and forces teams to send actual units in instead of just placing Wards and calling it a day. Don’t waste your time trying to place them in there.

All these restrictions and limitations in the pit combine to make taking Roshan very difficult—at least without making it painfully obvious that your entire team is inside. Five heroes missing from the map can only really mean two things, after all—either the enemy team is trying to gank or initiate as five, or they’re in the Rosh pit trying to sneak one under your noses. The cramped spaces inside the pit also mean that area of effect stuns and disables become way more effective, and positioning against them becomes a herculean task. Therefore, going for Roshan is a tactical decision that must be made very carefully with your teammates. One mistake can get punished heavily if the enemy team is attentive and quick to react.

Of course, this can be somewhat nullified by drafting a lineup that excels at taking Roshan, or purchasing items that accelerate the speed at which you can bring him down. After all, the faster you take Roshan, the less time the opponents will have to respond and contest. Armor reduction is perhaps the best way to make Roshan a lot softer; heroes like Slardar, Alchemist, and Templar Assassin can provide the reduction needed. As for items, Medallion of Courage, Desolator, Solar Crest, and Assault Cuirass all do the same thing.

Aegis of the Immortal

Of course, all that trouble doesn’t come without any benefits. Killing Roshan is actually one of the most rewarding tasks in the game, thanks to how much gold and experience you get out of the ordeal. The most important reward, however, is the Aegis of the Immortal: a token dropped by Roshan on death. The Aegis lasts five minutes after being picked up, and cannot be dropped or sold otherwise.

Should a hero die with the Aegis in their inventory, the hero consumes the item, and comes back to life on the same spot five seconds after. The resurrected hero has full health and mana upon rising from the dead, giving them the ability to retaliate right after. This effect alone has many tactical benefits, the biggest of which is forcing your opponents to use their cooldowns to kill you the first time around. Without their important spells at their disposal, they will be forced to either retreat, or try to fight the rest of your team with drastically reduced strength. Your teammates can also surround the point where you died while your hero’s spirit returns to the world of the living, thus discouraging the enemy team from finishing you off for good.

Any of your own cooldowns, however, will simply continue from where they were prior to death—which of course means that your hero can turn into a sitting duck after coming back from the afterlife. We suggest keeping this in mind, or you might overextend yourself thinking that you have the Aegis to protect you from actual death. Mind your positioning and where the enemy team may be regardless of whether you have it or not.

Should the Aegis remain in a hero’s inventory upon the expiry of the five minute timer, it disappears completely. It does, however, leave the hero with a parting gift: a buff that regenerates both health and mana to full at a rapid rate, similar to what the Regeneration Rune provides. Just like the rune, though, the buff is cancelled immediately after taking damage from an enemy hero.

The Aegis isn’t all that Roshan has to offer to worthy opponents, though. Subsequent kills net additional consumable rewards in the form of Cheese and the Refresher Shard. Both items are dropped by Roshan on his second and third consecutive deaths, respectively—and once Roshan is

Silly as it might sound, Cheese is actually one of the most powerful active consumables in the game. Upon usage, Cheese restores a whopping 2,500 health and 1,500 in an instant, without any need to wait for regeneration to kick in. Such a massive burst heal is incredible in teamfights, and can help heroes with large health and mana pools survive much longer in protracted engagements. Cheese is also completely shareable, which means you can transfer it to another hero’s inventory without any restrictions.

Alternatively, Cheese can be sold for 500 gold. In some cases, it is better to do so in order to grab a key item that much sooner, which could have a much larger impact on the game than simply keeping the Cheese around.

The Refresher Shard does exactly what the name implies: it resets all your cooldowns instantly, just like Refresher Orb does. Unlike Refresher Orb, though, Refresher Shard costs zero mana on use, as opposed to the massive 375 mana cost of using Refresher Orb. This alone sets it way far apart from its bigger brother, allowing literally any hero in the game to use it even after they’ve spent most of their mana with their first set of cooldowns.

Needless to say, Refresher Shard can be game-changing. As long cooldown spells become more valuable in deep late game scenarios, so does the ability to refresh them with no questions asked. Need a second Black Hole to help you out in a teamfight? Or perhaps another Nimbus to work with? Refresher Shard can help, at no extra cost.

Like Cheese, Refresher Shard can also be sold for 500 gold, but honestly we think that it’s worth more than just that.

Of course, just like any other creep, Roshan also respawns—though in much longer intervals compared to the regular lane creeps or even the neutral creeps in the jungle. Roshan’s respawn timer is fixed at a range of eight to eleven minutes, which is determined randomly by the server when Roshan dies. Neither the Radiant nor the Dire will see any indication of what the respawn timer is, though spectators and casters can see a clock inside the pit.

Thus, it becomes quite important to note down Roshan’s time of death, in order to keep track of when he might respawn the earliest. To do this, simply alt-click the in-game clock, located in the center of the top of the in-game user interface. This will copy and paste the current time elapsed, and will send it to your teammates via team chat. From there, you can simply add eight minutes to the clock, and that will give you the soonest possible respawn time. Be sure to check for Roshan around that time, and let your team know if he is once again alive or not.