Tinker is a mechanically demanding Intelligence hero that asks a lot out of players in terms of sheer actions per minute and general game sense.His fragility and lack of a built-in escape mechanism renders him vulnerable to stuns, disables, and nukes, if he is caught out of position. However, he does most of his work from long range, opting to keep his distance in teamfights while dealing magic damage from afar.

Though he is typically placed in the mid lane, he plays more like a position 1 carry than a true position 2. This is because of Rearm, which makes Tinker the best hero in the game when fully-equipped with items that have active abilities. Left unchecked, Tinker can control and nuke down entire teams with Laser, Heat-Seeking Missile, and his arsenal of items like Scythe of Vyse, Dagon, and Ethereal Blade. 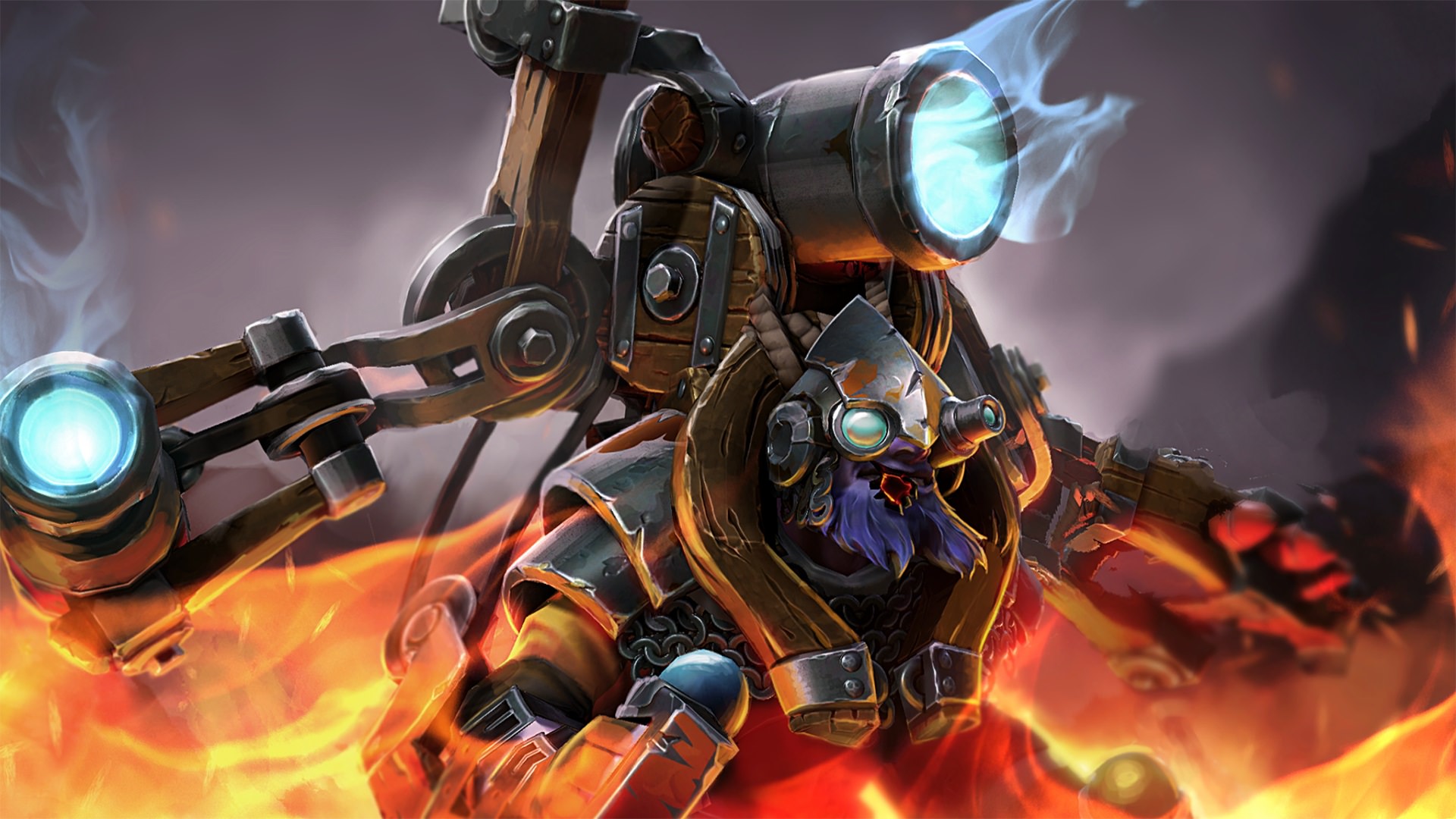 His gameplan is also fairly simple and easy to grasp. Bully your lane opponent with Laser and its miss chance debuff, while farming with March of the Machines on your way to Boots of Travel. Once Tinker obtains his favorite shoes, he becomes a menace on the map, able to terrorize any lane he chooses so long as there are nearby friendly creeps and/or structures to teleport to. Toss a Blink Dagger into the mix, and he becomes infuriatingly slippery and difficult to take down.

Of course, teleporting to lanes that are pushed towards your opponents’ side of the map presents a huge risk to Tinker. A good pair of supports to ward common ganking paths for you is essential to victory, especially before your Blink Dagger timing. Otherwise, heroes waiting in the shadows will simply pounce on you as soon as your teleport finishes—which will lead to a swift death unless you have backup or are so overfarmed that they cannot kill you anyway.

With proper anticipation and sharp game sense, though, it is possible to completely outmaneuver your enemies. If they are unable to shut you down early enough, you will take over the game unless they have a hero that directly counters you in the late game. A hero with practically no cooldowns to speak of is terrifying indeed. And if this gets you excited, read on—Doctor Tinker will show you the way.

Tinker’s skill progression is fairly simple, and follows a logical path from the early game. Four points are invested into Laser and Heat-Seeking Missile (two each) during the laning phase, then the next four skill points after that are given exclusively to March of the Machines.

From levels 1 to 4, all you need to focus on is last hitting creeps in the mid lane, while harassing your opponent with your two nukes. Laser in particular annoys right click-dependent mids, since it blinds them completely for three seconds. Try not to use Heat-Seeking Missile too often, though, unless you have the mana to support spamming it in lane.

March of the Machines helps fuel your mid game farm, which is why it is maxed out first. Stacked jungle camps and lane creeps alike will melt to it, and it also serves the double purpose of shoving lanes to the other side. Use Boots of Travel to teleport to your lane of choice, Blink Dagger to hide in the treelines, then cast March of the Machines under the cover of fog. Rearm to repeat, while constantly repositioning yourself in the trees in order to further conceal yourself.

Then, once you have your early core items, you can participate in ganks and teamfights with your two (or more, depending on your item choices) nukes. Be sure to position yourself to maximize your spell range and to get as many targets in Heat-Seeking Missile as possible, while also keeping yourself safe during Rearm’s channeling time.

Tinker’s item build largely depends on your team’s draft as well as the opponent’s, though Boots of Travel and Blink Dagger are practically non-negotiable. Both of those items give Tinker some much-needed mobility and elusiveness, and without them he is less than half the hero he could otherwise be.

As for mid game core items, Aghanim’s Scepter is one of the best choices available. It massively increases Tinker’s reach and teamfight damage output, thanks to the increased number of targets for both Laser and Heat-Seeking Missiles. Agh’s is useful from the mid game onwards as well, since it boosts your teamfighting power both in the open field and when sieging/defending high ground.

Once done with Scepter, Tinker’s item choices branch out from there. Shiva’s Guard is a fantastic utility pickup, thanks to the many benefits its active ability provides (flying vision and a 40% movement speed slow!) and the passive attack speed slow aura. The latter is particularly useful against enemy carries, though it does require you to be closer to danger than you’d normally like.

Dagon is still viable on Tinker, though it is less important now than it was circa 2015. You still get to delete single targets with relative ease, though nowadays the defensive capabilities of Aghanim’s Scepter are more valuable in this carry-heavy metagame. This does, however, mean that Ethereal Blade still has a place in Tinker’s backpack, since it disarms physical damage carries while providing you with extra stats and burst damage.

Scythe of Vyse has certainly seen better days (meaning the days before Lotus Orb was added to the game), but against teams that don’t purchase its counters, it’s a perma-disabling stick of shame. It costs an arm and a leg to buy, but given Tinker’s farming and splitpushing prowess it isn’t that hard to shoot for in deep late game situations. Consider purchasing one if you’re having trouble closing out significant gold advantages against a non-BKB carry.

Bloodstone, while situational, should always be kept in the back of one’s mind. Not only does it give Tinker a boatload of extra HP and mana, but it also reduces his respawn time. Teams that run Tinker in their draft typically find themselves vulnerable whenever Tinker is sidelined, so the respawn time reduction is definitely welcome against teams that group up and push for objectives.

Mastering Tinker is going to take a bit of practice. Finger speed and fast reaction times are required to make the most out of this hero, considering his lack of durability in the face of disables and nukes, as well as his heavy dependence on Blink Dagger and Rearm.

In the hands of an experienced player, though, Tinker becomes one of the most oppressive heroes in the game. Nearly unlimited map presence, practically infinite mana thanks to Boots of Travel and the fountain, and great offensive and defensive capabilities makes him a solid choice for those who really know what they’re doing.